Billy Green And Balderdash: The Facts

Billy Green And Balderdash: The Facts

The Stoney Creek Historical Society published this 30 page booklet on the role of William (Billy the Scout) Green in the Battle of Stoney Creek which took place on the 6th of June, 1813. This battle is regarded as a turning point in the War of 1812 and Billy Green’s role in that British victory has been examined in meticulous detail by the authors. There is no doubt that his name “Scout-Green”, is rightly inscribed on the Battlefield Monument at Stoney Creek.

Written in reply to James Elliott’s “Strange Fatality”, Appendix ‘A’, which downplays and disputes the role of William Green in the War of 1812, this new booklet offers research that overturns Elliott’s revisionist history.

A revised copy was prepared in November 2011 for UELAC with several amendments for clarity and two corrections (“Hannah Corman” was in fact Hannah Green and the reference “H.A. Corman 1909” is now accurately cited as 1916). The detail that Billy told Dr. Brown his story before August 1856 was introduced.

With the kind permission of The Stoney Creek Historical Society, the book is available here as a PDF – download here.

Printed copies may be obtained from the Society for $4.00 including mailing within Canada. The Stoney Creek Historical Society’s address is P.O. Box 66637, Stoney Creek, ON, L8G 5E6. 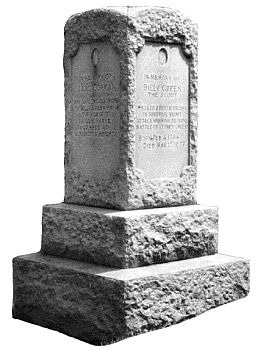 Support in a community newspaper column during 2011 for Elliott’s theory led the authors to examine some claims in further detail, careful attention being paid to sources, to the plausibility of local stories and to variations in the transcriptions of Billy’s story. The earliest text available is identified, examined and carefully transcribed. It reveals that the simplified outline given by Billy of the course of the battle is both coherent and consistent with other evidence. The theory that Peter VanWagner concocted Billy’s story late in the nineteenth century is further undermined by “Billy Green and More Balderdash” written by Lubell, Clark and Green (February 2012).