Burdens of Loyalty, by Stephen Davidson

Every now and then, a true gem crosses the path of the family researcher. A jewel that not only sparkles with new information, but also has the luster of being, well, just plain entertaining. On those occasions, the business of genealogical digging becomes a true joy. This happened to me last month when I received an email informing me of a new book, centered on a Lyon family, that fell into an easily readable format. The subtitle of the book was the first thing to catch my eye. The First American Civil War! Was there something I had missed in high school History class?

We use the term Civil War to designate those conflicts that occur within the borders of a nation in which brother fights brother, neighbor fights neighbor. That’s EXACTLY what this book covers — the conflict that existed between those loyal to the British crown (Loyalists) and those seeking independence from England (Patriots) during the American Revolutionary War. As we read, we see longstanding friendly relationships disintegrate and disappear as sides — and arms — are drawn.

The focus of the story, and the family around which the maelstrom of national politics and its aftermath centers, is that of John and Hepzibeth (Betts) Lyon of Connecticut. (John and Heppy appear in the LFA database and several of our members are descendants.) To have detailed personal details of any family during a major historical event is special. To have those events related to a Lyon are even more so.

Burdens of Loyalty is an easy and entertaining book — more personal in nature than scholarly, but within its 200+ pages, the reader will find wonderful insights to the life and troubles of a family finding itself pitted against friends and neighbors and, ultimately, ending up on the losing side of the conflict. The story of the Loyalists after the War is largely unknown. The tales of blacklisting hardships, of resettlement, of the need to begin life anew in a foreign land leave the reader with a renewed appreciation for the fortitude of our ancestors.

In the pages of the Lyons Tale, I frequently encourage you to dig beyond the bare facts of dates and places in your research and to “put meat on the bones” by finding those anecdotes and historical facts that make our ancestors come alive. In Burdens, Steven Davidson has done a superb job of just that. John and Hepzibeth are followed before, during, and after the War and we learn of the living conditions and family and community relationships during this pivotal period in American history.

Like any good reference on the Revolutionary War, Burdens covers battles and bravery, prison life, and fugitive strategies — but it also shows the endurance of the human spirit, the fortitude of standing up for your convictions, and the healing strength of community. The Lyon family is at the center, but their story is enmeshed with the stories of many other loyalists (and patriots) to place events of the time in fuller context.

Some textbooks mention that a Patriot fife and drum band was at the ceremony of Cornwallis? surrender at Yorktown. It’s been said that the tune they played was “The World Turned Upside Down.” A fitting tune to describe the life John and Hepzibeth faced as they became participants in the largest human exodus in American history. With the fertile fields of Connecticut behind them, they, with thousands of other loyalists, chose to begin life anew in Canada.

This book is a “must read” for any Lyon descendant, even if you are not a direct descendant of John and Heppy. You’ll gain a new appreciation of life in the late 1700s New England. A bibliography is included to assist researchers. Burdens of Loyalty can be purchased directly from the Trinity Enterprise website. 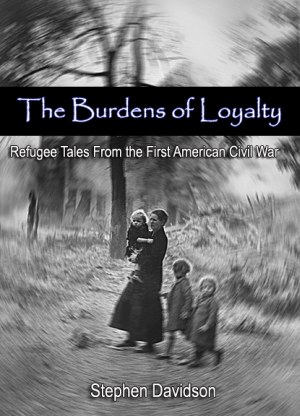