An Annotated Nominal Roll of Butler’s Rangers, 1777-1784, With Documentary Sources, by Lieutenant Colonel William A. Smy

When casually reading about Loyalists and their stories, one invariably comes across Butler’s Rangers. Between 1778 and 1781 they mustered ten companies and up to 534 Rangers of all ranks, Colonel to Private. By the end of the Revolutionary War, over 900 men had served in the Rangers. Upon disbanding, Butler’s Rangers settled mainly in the Niagara peninsula, at Detroit, or along the Thames River. As William Smy reports, they were also found in settlements as far away as Prince Edward Island and overseas. It is no wonder that so many Loyalists have an ancestor found in this Roll.

Smy’s Annotated Nominal Roll is divided into several parts: historical overview, brief Butler’s Rangers history, nominal roll, and sources. Special features are the detail and obvious zeal in reporting all known facts about the Ranger, followed by a coded system of footnotes that lead the reader to the end of the book for the specific source. The sources are arranged under the following headings: British Library, British Public Record Library, National Archives of Canada, Ontario Archives, and Published Secondary Sources.

The advantage of Smy’s Annotated Nominal Roll is that it provides excellent vignettes about each known Butler’s Ranger. The disadvantage is that, to check any particular fact or statement in these individualized vignettes, the researcher must check all the sources listed for an individual as there is no direct reference to each fact or statement. Nevertheless, Smy was thorough in his research, also including one chapter that lists all Rangers who lack primary documentation but may be mentioned on an old UE list. He states in his notes on the Roll that this book should by no means be regarded as definitive or exhaustive since the research team is always looking for primary sources that may come to light.

Lieutenant Colonel William A. Smy spent most of his adult life accumulating data on Butler’s Rangers. He is recognized world-wide as the foremost authority on the subject and has lectured and authored many articles on Colonel John Butler, the Butler Family and the Butler’s Rangers. His latest book is a welcome addition to any Loyalist library and is highly recommended for public and high school programmes.

William A. Smy has graciously donated all the proceeds from the sale of this book to the Friends of the Loyalist Collection at Brock University, a registered charitable organization whose mandate is to establish a collection of original United Empire Loyalist documents on microfilm. These include government correspondence, military orders, regimental muster rolls and land grant records, most of these documents being held in the Public Record Office in the United Kingdom with some at the National Archives in Canada. The objective is to purchase approximately 1,500 rolls of microfilm. As the cost is between $100.00 to $150.00 per roll of film, the total expenditure is upwards of $150,000.00, with a target date to complete the collection within fifteen years. Funding for this project is provided by donations from interested individuals and organizations and through the sale of Butler’s Rangers Annotated Nominal Roll.

This book can be purchased from The Friends of the Loyalist Collection at Brock University, P.O. Box 23041, RPO Seaway Mall, 800 Niagara Street, Welland, Ontario. L3C 7E7. An order form can be obtained via their web site. Cost: $40.00 plus $10.00 postage and handling in Canadian Funds, or the equivalent in US funds. 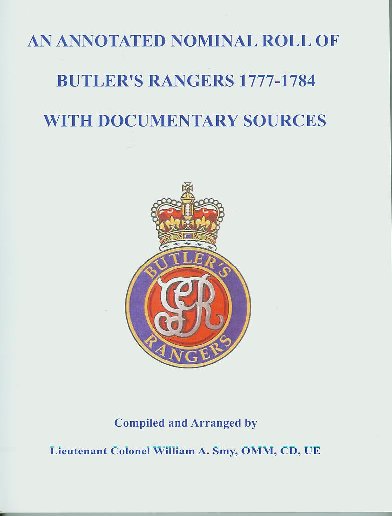