In this illustrated true tale of the American Revolution, Janet Lunn tells the story of Charlotte Haines, a young girl who must face one of the cruel realities of war – family division. Tensions mount in the aftermath of the rebel victory in New York. Charlotte’s father supports the rebel Patriots and has broken all ties with the Empire. He even shuns his own brother, a Loyalist. Forbidden to see her cousins who are only hours away from their departure for what would become Canada, Charlotte must make a difficult decision. (Source: Tundra Books)

Gr. 4-6, younger for reading aloud. Based on a true story, this unusual picture book takes readers back to New York City in 1783. Ten-year-old Charlotte has a dilemma. Her father, who supported the colonists during the Revolution, feuds with his brother, a Loyalist. He has forbidden Charlotte to speak with her uncle, aunt, and cousins. Now that the war is over, Loyalists are being transported to Nova Scotia. Charlotte slips away from the slave who escorts her to school and runs off to say goodbye to her beloved relatives. When she returns home, her father bars her way at the gate, saying, “You have made your choice. I never wish to see your traitorous face again.” Shaken, Charlotte returns to her aunt and uncle, who take her to live with them in Canada. An afterword briefly tells what happened to Charlotte Haines, who never saw her father, mother, or brother again. Illustrated with luminous paintings of dramatic scenes, this book looks accessible to young children, but that age group may be frightened by the fact that a child could be banished from her home and country for a single act of disobedience. The book will be more meaningful to middle-graders, who may find Charlotte’s punishment a shock, but will at least know something about the period. They will certainly learn more here. Slaves in the North? Loyalists shipped off to Canada? Banishment of children? This dramatic story is a far cry from the usual Revolutionary War tale in which children perform small, quiet acts of bravery in the patriotic cause. Intriguing and emotionally wrenching, this provides clear-cut depictions of good and evil. And if the American patriot is the villain for a change, that in itself is a matter for discussion. (–Carolyn Phelan) 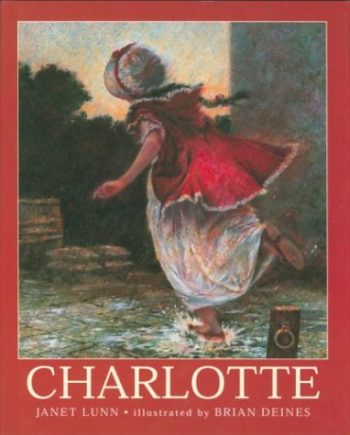