Defending Our Home: Loyalist Families of Dundas County and the Battle of Crysler’s Farm, by Ronald L. Doering, UE

Within 30 years of our Loyalist ancestors’ arrival in what is now Ontario, they made significant progress turning the primeval forest into prospering farms and settlements. One can only imagine the uneasiness that must have accompanied the news that their former foes would be threatening their peaceful existence and hard won homes in Upper Canada. Throughout 1812 and into 1813, news of the various battles, victories and losses alike, would have filtered back to the farms and communities of Stormont, Dundas, and Glengarry, until in late autumn 1813, these refugee Loyalist families found themselves in the path of the single biggest offensive in what was to become known as the War of 1812.

On November 11, 1813, the Battle of Crysler’s Farm was fought and won by British, Canadien, Aboriginal and local militia soldiers. Although the battlefield is now almost totally below the waters of the St. Lawrence River, the sacrifices made there by these soldiers were pivotal in stopping the American march on Montreal in the fall of 1813 and, when combined with the Battle of Chateauguay, almost certainly ensured the eventual outcome of the war.

Ronald Doering, in his first historical fiction novel, has provided the reader with a book that not only is true to the historical aspects of this infamous battle, but also gives his audience a look into the lives of the settlers of the first concession of Dundas County where the Battle of Crysler’s Farm occurred. Doering says that his inspiration for this book was “… to tell a good story, raise awareness about early Ontario history and, in particular, demonstrate the importance of the Battle of Crysler’s Farm that took place in our front yard; and, to base a novel in Dundas County that says something about who we are and where we came from.”

Mr Doering, a retired lawyer living in Ottawa, is a member of the St. Lawrence Branch of the UELAC and was formerly a member of the Sir Guy Carleton Branch, his Loyalist ancestor being Johannes Marsellis (Marcelus). For several years Mr Doering portrayed his Loyalist ancestor while serving as a re-enactor with the King’s Royal Regiment of New York.

Defending Our Home covers the period July 23 to November 11, 1813. Each chapter heading provides the location, date, and time of the events contained within the chapter. Despite being a fictional account, the events described are historically accurate, the characters well developed, and the setting so realistic that one realizes soon into the reading that this was the result of an immense amount of research. The novel concludes with a historical afterward that provides the reader with interesting accounts of what eventually happened to the real characters.

In my opinion, this well written, well researched book would be most appealing for those interested in the early settlement history of Dundas County, the Battle of Crysler’s Farm, the War of 1812, and people who just enjoy a fast moving historical fiction novel. 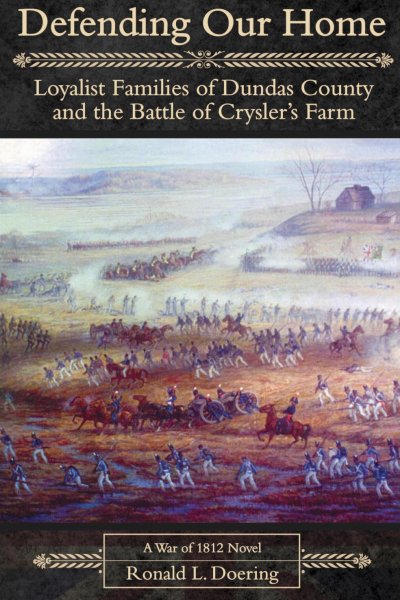 Defending Our Home can be purchased at most bookstores and online (with free postage) from the publisher Borealis Press (the link can be found at www.ronalddoering.com).