Loyalists and Layabouts: The Rapid Rise and Faster Fall of Shelburne, Nova Scotia, 1783-1792, by Stephen Kimber

About the middle of May, I received a review copy of Stephen Kimber’s book Loyalists and Layabouts: The Rapid Rise and Faster Fall of Shelburne, Nova Scotia, 1783-1792, published May 17, 2008.

I have read many books on that period of history related to the United Empire Loyalists’ experience, but each one always gives another insight into and a better understanding of those turbulent times.

While the title suggests the book might be limited to those readers with roots in Shelburne, the sub-plots developed give any reader a broader understanding of the many reasons for the rebellion in the colonies. I was impressed with the care shown by the author to be historically correct while at the same time re-imagining to flesh out the details.

The author’s acknowledgments and bibliography at the back of the book will serve as a source of information to anyone wanting to delve deeper into the loyalist experience. I picked up on a number of interesting details about the “Boston massacre” pp.37; the political leanings of General Howe pp. 40; the exchange between Washington and Carleton about freed slaves pp. 111 -114 and the awakening of the public’s conscious toward the moral wrongs of slavery.

2008 is the 225th anniversary of the arrival of those refugees from the colonies to what remained of British North America. This book is a must read for anyone wanting to better understand the forces that shaped our country, Canada and our neighbour to the south, the United States of America and as well, Great Britain.

I encourage anyone to read this book, especially this anniversary year. 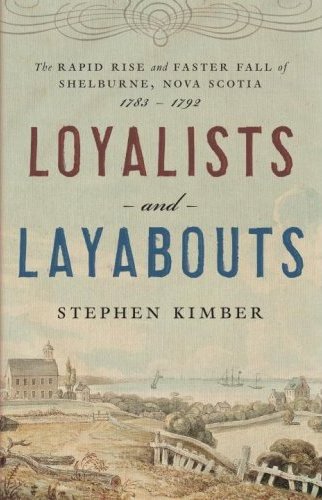