Just in time for Christmas gift-giving, Tundra Books has released an excellent picture book by Mary Alice Downie for everyone interested in our Loyalist heritage. Presented as an alphabet book, A Pioneer ABC introduces the reader to the early life in Canada of a Loyalist family.

Including B, which is for bandalore, a forerunner of the yoyo, H for the Hornbook that taught children to spell, and on through the pigeons that blackened the sky, and X for the exhaustion of parents who are homesteading, each letter of the alphabet is treated to historical references which are beautifully illustrated by Mary Jane Gerber. In addition, each painting is framed by a border with numerous related items that begin with the same initial featured on that page.

In her introduction, Mary Alice Downie establishes who the United Empire Loyalists were and the personal relationship to those early settlers she feels as a resident of the Kingston area. Complementing her story of early Loyalist family life is a useful list of items for readers to find in the illustrations. The author also includes detailed notes which explain how each item figured in the life of the pioneers.

A Pioneer ABC is a most accessible introduction to early Loyalist history. While Tundra Books recommends it for ages 5 to 7, I would recommend it for every family that celebrates Canadian history. 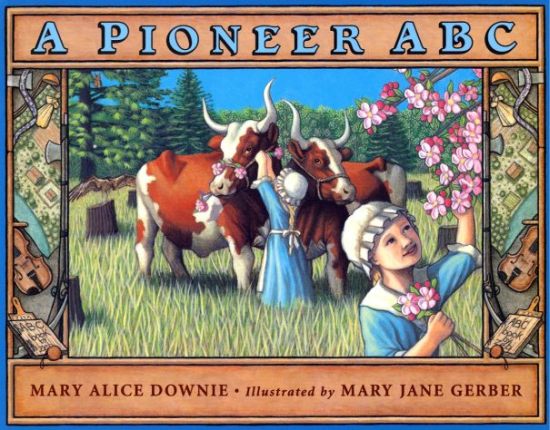