Born into both prestige and wealth as the grand daughter of one of the most powerful men in America, Polly was ill prepared to taste the bitter fruit of war. Torn from her roots in 18th, century America, she would experience many grave disappointments. Undaunted, she would continue on her quest to regain and even surpass her youthful hopes and dreams.

This is the true story of Mary (Polly) Johnson, the Grand daughter of the famous militia General & Indian Superintendent, Sir William Johnson. Her father, Colonel Guy Johnson, played an important role in the struggle to save Canada, but fate was not as kind to him. 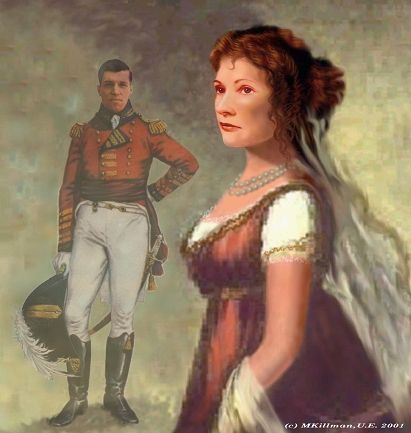 “The book Polly is the fourth historical subject manuscript that I have produced, and in two cases I have written them in story form. This has caused some historians to label these works as fiction, due to the inclusion of dialogue and some minor bits of creative writing.

I make no apologies for taking artistic license with these subjects, and feel that they are as accurate as any biography is likely to be. I have not tinkered with any factual account where solid contemporary records exist.

I have merely taken the authentic recorded facts and glued them together with some dialogue and the occasional trivial embellishment.

It is my contention that the stories of United Empire Loyalist struggles should be told, and preferably done in such a way as to make them an interesting read. In my opinion, there is limited readership for ultra dry scholastic documentary writing.”

The author, a seventh generation Canadian was born in Hamilton, Ontario in 1929. Murray became a professional artist in 1952. He resigned as the Creative Director of the Canadian subsidiary of the multi-national International Harvester Company in 1973. From there he went on to be a journalist and fine art painter specializing in wildlife and historical subjects. His paintings, art prints, collector plates, and an earlier non-fiction book that chronicled his Loyalist ancestor’s story have enjoyed worldwide distribution.

Murray Killman, U.E. has used his United Empire Loyalist title with pride on all of his paintings. “Unity of the Empire,” may be an out of date title, but it does identify his proud paternal roots. He is the descendant of a notorious “Butler’s Ranger,” a member of an irregular guerrilla army that struck pure terror across the northeastern colonial frontier. It is said that they gave Gen. Washington more trouble than a whole regiment of British regulars. The fact that his ancestor was a King’s man was no secret, for the family had no reason to conceal this fact. They had been near neighbors of Sir William Johnson and were quick to join the Loyalist ranks when the rebellion began.

The same cannot be said for some of the author’s maternal lines, for within their carefully concealed pedigree can be found some of his Tory grandfather’s old enemies. One family in particular fits the exact description of the title of the first chapter in the author’s book, “the Bostonians.” Yes, after 200 years Murray discovered the truth and the record of another ancestor, a soldier in General George Washington’s Continental army has been revealed. A New England root beginning in 1623. This grandparent enlisted in the Connecticut line of 1777-1781 and served with Captain Scovil’s Company of the 4th Brigade of Connecticut State troops. This is probably not an unique situation, but it does put the author in the position of representing both sides in the American Revolution. That along with Native American and French blood does indeed remove the risk of a charge of bias.

The American Revolution split families right down the middle, pitting brother against brother and neighbor against neighbor. For more than a hundred years many families concealed their former allegiance, for fear of retribution. That was true of both Whigs and Loyalists when they immigrated into areas occupied by their former enemies. Close examination of the early populations in North America seems to reveal that the most obvious difference between those living in Canada, and those living in the United States, was largely geographical. The greatest single change had been land tenure, political ideology and power. The price for a republican democracy below the 38th parallel had been very high, and for many it meant the loss of everything that was near and dear to them.

The author felt that Mary Johnson’s story was an interesting example of what can happen to anybody, when their life is completely torn apart by circumstances beyond their control. When their very birthright, a long standing entitlement has been taken away from them forever.

William Johnson, the patriarch of the American branch of the family was born on his father’s estate called Smithstown near Dublin, Ireland in 1715. In 1738 his uncle, Captain Peter Warren sent the twenty three-year-old to the Mohawk Valley of New York to manage his land interests. This was a property known as Warren’s bush that contained an estimated 16,000 acres 6475 hectares on the south side of the Mohawk River. Twelve tenant families came with the young Irishman, and it did not take him long to engage in trade, and acquire his own land. It was on land in what is now Amsterdam, New York, that he built his first house in 1739. Here he brought his first wife, Catherine Weisenberg, who had been an indentured German servant girl. Legend has it that he purchased her contract, then married her. They had three children from this union, Ann, (Nancy) born in 1740, John born in 1742, and Mary, (Polly Sr.) born in 1744. The latter is the mother of the subject of this book.

It did not take the young entrepreneur long to realize that there was a great deal of money to be made in honest trade with the Indians. He gained their trust and respect, a real asset during the war against the French. As the commanding general of the Mohawk valley militia, his military success gained him the hereditary patent as a baronet. That was followed by a Royal commission as Superintendent of Indian Affairs for the Northern District. By the time of his death in 1774, Sir William had amassed his own empire centered in Johnstown, New York. The land that he had acquired for himself and his children extended for miles. This was indeed Johnson country, and the family was a major political force to be reckoned with.

This story was inspired by a rare unpublished collection of poignant letters written early in the 19th century by Julia Johnson. She was the spinster sister of the lead character in this memorial. It is the author’s sincere intention that the following biography should offer a fairly accurate window into the life and times of Julia’s sister Mary, (Polly) Johnson. Her fate was tied to her Royalist family’s allegiance. Unfortunately this loyalty to their sovereign, King George III, carried a heavy price tag for the entire family.

Desperate men struggling for their cause in the shadow of the gallows, would change her life. The genesis of the greatest nation on earth demanded the removal of the powerful Johnson family. The mantle of authority and tenure would be ripped from the old British establishment, but not without a terrible penalty for both sides.

This telling account written in the first person chronicles Polly’s remarkable saga. This was a time when there was a sharp line drawn between the various class levels. A time when good health was not taken for granted, and medical doctors were of questionable value. Little if anything was known about the cause of most sickness, and remedies like bleeding were in common practice. This was also a time when relationships were exceedingly formal. For example, a wife would refer to her husband by his last name prefixed by “Mr.” Marriage was a exceedingly serious step for most women, and in many cases wives were treated like mere chattels. They had in fact become the property of their new husband. Usually they had no money of their own, and were considered non-persons without even the right to vote.

Most black slaves did not experience an easy life, and were seldom shown any courtesy, or even acknowledged with a salutation. People in those times did not enjoy any form of Medicare, and usually only soldiers, or their widows received pensions. For this reason the size of a lady’s dowry was extremely important if she hoped to capture a promising husband. Such a person would need to be a wealthy member of the upper class. However, no woman could be absolutely sure if her new husband was indeed wealthy. Many a new bride quickly discovered that she had been duped. The handsome husband could turn out to be a brutal penniless monster in gentleman’s clothing. Finding a suitable husband could be a real challenge for a young woman, if her circumstances were at all unfavorable. Women in the lower circles were more or less resigned to a life of domestic drudgery, and child rearing. One of the author’s own New England ancestors was married at the age of 12 and from that year until she reached the age of 53 was still producing children, 16 in all. However, this would be very hard for a gentlewoman, who had known nothing but servants, boarding schools, and social events.

Mary (Polly) Johnson was born into one of the wealthiest families in America. She was well educated, and trained in the social graces of those times. Although she was eminently prepared for a very promising life among the colonial aristocracy, the outbreak of the American Revolution quickly changed all that. As the first shots were being fired at Lexington Common, the very safety of young Polly came into question? Survival itself had become an issue, and as the dark shadows of rebellion passed over the colonies, the rebel congress in New York resolved, “that any person being an adherent to the King of Great Britain shall be guilty of treason and suffer death”. Would this pretty little eleven-year-old aristocrat be destroyed by the civil war, or would she manage to find her way back into the comfortable world of the upper class?

Polly, by Murray Killman UE (ISBN 0-9694642-2-3), is 215 pages long. It is available as a hardcopy book, or online where it is stored as a PDF document, which is somewhat large (for slower connections) at just over 4MB.

Please note: All rights reserved. No part of this book may be reprinted or reproduced or utilized in any form or by any electronic, mechanical or other means, now known or hereafter invented, including photocopying and recording or in any information storage or retrieval system, without permission in writing from the author, excepting possibly brief quotes used in connection with reviews written specialty for inclusion in a magazine or newspaper.

Special permission has been given to the United Empire Loyalist Association of Canada – as of December 2006 – to make the book available for free to visitors, noting that such downloads are intended for the reader’s own use and pleasure and not for subsequent sale.) Click here to access the book in PDF format. © MKillman UE, 2000.

Click here for a separate one-page genealogy of Sir William Johnson, his first wife, Catherine Weisenberg, and their children and grandchildren.