Simon Girty, Turncoat Hero: The Most Hated Man On The Early American Frontier, by Phillip Hoffman

The prevailing reputation of Simon Girty from the era of the American Revolution was, like Joseph Brant and Walter Butler, a MONSTER. Phillip Hoffman, as did Isabelle Kelsay with Brant and Howard Swiggert with Walter Butler, makes Simon Girty very human and likable, although still formidable as a fierce fighter. Simon, an illiterate, was indispensable to European and Indian for his fluency in several Indian languages. Hoffman gives us a full picture of Simon and his brothers from when they were captured as boys by Indians and brought up in Indian ways. The Girtys started off as rebels in the Revolution but switched sides when they understood the hypocrisy of the rebels toward the Indians, to whom they pretended friendship while planning to exterminate them and take their lands. Simon was blamed by the rebels for the savagery and gruesome torture practised by the Indians on their prisoners, as if he could have stopped them when to try to do so would have meant his torture and death.

As it was, Simon did risk his life at times to save Indian hostages from death. He sympathized with the plight of the Indian because he had been brought up as one but he retained a humaneness that helped him to avoid the brutal instincts of both Indian and white. This sense of compassion for both sides motivated most men who had lived in both the Indian and white worlds such as for example Capt Billy Wells, who, brought up by Indians, lost his life trying to prevent the slaughter of white women and children at Fort Dearborn.

Hoffman gives us a clear and detailed picture of the negotiations, battles, deceptions, Indian alliances and follies during the Indian conflicts with the implacable Americans following the Revolution that only many years of research could have attained. “Thousands of acres,” he wrote, “were needed to fulfill the enlistment promises of land that had been made to officers and men. If there was no other way, America would clear the Indians off by force.” To do this the Americans had to demonize the Indians. Hoffman gives us the tragic human nature of this struggle for land and power in which Simon Girty played a major role. The book will be a valuable addition to those written on the men and women who shaped this period of our history.

[The Girty brothers have been of interest to me for a long time. John Richardson wrote about them in The Canadian Brothers because he knew them in Amherstburg when growing up. I mention them in McKee Rankin and the Heyday… because they knew Col Alexander McKee in the Revolutionary War. I mention Simon in my latest book, From Bloody Beginnings, because Joseph Brant picked a fight with him. He was one of many white boys captured and brought up by Indians and bears comparison to Capt Billy Wells, Ben Fairchild, etc. Wells, by the way, is featured in Richardson’s Wau-nan-gee. Yours, David Beasley] 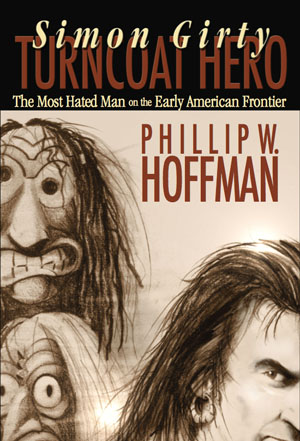