The Loyalist Tiles Of St. Alban’s

Diane Berlet and the History Committee of St. Alban’s Church in Adolphustown have produced a handsome publication which is not only a pleasure to view, but is also very informative.

The book was launched last October 29th before a full house at St. Alban’s Church at Adolphustown, literally across the highway from Bay of Quinte Branch’s Research Centre and Park. Several Bay of Quinte members were present.and the Branch’s student employee Carson Murphy was mentioned in particular for his assistance when author Diane Berlet was researching area families at the Centre.

St. Alban’s dates from 1884 and it was planned to coincide with the Centennial of the Loyalists’ arrival in the Quinte area. Canon Forneri was responsible for the push to realize this project and the neo-Gothic structure was designed by Joseph Power and Son. St. Alban’s particular claim to fame is the set of sixty-four encaustic memorial tiles which were paid for by descendants and friends in the 1880s. Brian Musselwhite of the ROM, (whom I knew in high school and university in Toronto), remarks in the Foreward that this grouping, was probably the largest installation of such tiles in Canada. (p5)

It is best to understand the scope of this collection before you actually view it. There is a general assumption that the tiles all represent Quinte area Loyalists. In fact while there are a number of such Loyalists represented, there are also other early area non-Loyalists, Loyalists from other jurisdictions and quite a few who were born in later times. For example there are tiles for Daniel Haight a Quaker, Joel Ingersoll a probable Rebel, and Stephen Jarvis UE a Loyalist from a different district.

The information on the tiles was provided by descendants over a century ago, and there are some errors. For example Capt. Abraham Maybee UE is listed as 96 years of age at his death, which is a few years off, and William Crawford is shown to have been in the Royal Rangers, when the King’s Royal Reg’t of NY would be the regiment.

Each of the sixty-four tiles is featured in a full page photograph and Diane has provided extensive notes to add more information about the individuals and in some cases to correct information on the tiles. There’s also detailed information on the source of the tiles in England and the specialized process used in their creation.

A number of UELAC members are mentioned in the Acknowledgements including Fred Hayward UE, Brian Tackaberry UE, Doug Grant UE, George Anderson UE, Philip Smart UE and myself to name a few. 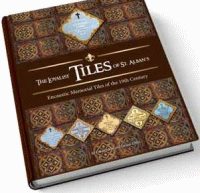