The Loyalist Corps: Americans Fighting in the Service of the King, by Thomas B. Allen and Tod W. Braisted

One of the first new loyalist history books published this year is The Loyalist Corps: Americans Fighting in the Service of the King written by Thomas B. Allen (Tories) and Tod W. Braisted (The On-Line Institute for Advanced Loyalist Studies). Within its 225 pages are succinct descriptions of over 150 loyalist military units.

But the book is more than simply an ideal gift for the military historian. The Loyalist Corps is an easily accessible reference tool for the loyalist descendant who wants a quick source of information on the battalion in which his/her ancestors once fought. Without having to wade through long descriptions of battles, generals’ biographies or political intrigues, one can quickly look up any loyalist unit that fought for the king between 1775 and 1783 to learn its history and the theatres of war in which it fought.

The Loyalist Corps also gives definitions for military words that were current in the 18th century but are confusing to the 21st reader. Uncertain of the meaning of reduction, pioneers, provincial, convention, associators, fencible or establishment? If you’ve scratched your head over such puzzlers, you will immediately appreciate Allen and Braisted’s scholarship.

In addition to brief histories and word clarifications, The Loyalist Corps also contains valuable information about where various loyalist military units disbanded, data that may help loyalist descendants connect their ancestors to particular battalions. For example, if you know that your loyal forbearers settled in Nova Scotia’s Cumberland County, Country Harbour, and Manchester Township, along New Brunswick’s St. John River, or in Prince Edward Island (Island of St. John), then this book will let you know which loyalist units disbanded in those various locations.

What makes this book so accessible to the genealogist as well as to the historian, is that the loyalist units are arranged alphabetically. Sometimes –where it eases the job of locating them– the battalions are listed by the colonies in which they formed. (Those with New York and New Jersey ancestors will especially appreciate this arrangement.)

Two other valuable features of The Loyalist Corps are the index of names and a timeline of the American Revolution (1754 – 1784). An instant classic resource, this book deserves to be in the library of every UELAC branch in the country — and on the shelves of any serious loyalist genealogist. If it is not yet available at your local bookstore, The Loyalist Corps: Americans Fighting in the Service of the King may be purchased (at time of writing) for as little as $7.33 (Cdn) on-line. 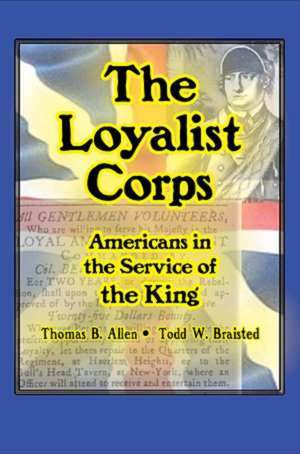