Tories: Fighting for the King in America’s First Civil War

Tories: Fighting for the King in America’s First Civil War, by Thomas B. Allen

My affection for my uncle Raymond Perry U.E., who suffered as a prisoner of the Nazis during World War II, makes it impossible for me to be impartial when I read a history of that conflict. Similarly, my connection to my Loyalist ancestor Peter Secord, prevents me feeling indifferent when I read a book like Thomas B. Allen’s “Tories. Fighting For The King In America’s First Civil War”. I can sense the irritation building if I continue reading for too long a continuous period. Unlike the infamous Mel Gibson movie “Patriot”, however, Mr. Allen’s book seems to “tell it like it was”.

The book traces the event from its beginning as a political protest against perceived unfair taxation, through the elevating protest against the King and British control, to the shedding of blood at Lexington and Concord, to the persecution of fellow citizens solely because they did not want to join in opposition to the government, to the Declaration of Independence in July, 1776 establishing a full revolution and finally descending to “savage fury” and “nothing but murders and devastation in every quarter” between people who were fellow Americans.

It is interesting to watch the attitude and rhetoric change as the revolt develops. It is perhaps typified by George Washington himself. As one who undertook at least two oaths of allegiance to his King, one in his earlier military role and one as a Mason, Washington’s position changed radically. Initially, Washington denied he was seeking independence but much later, in a letter to his brother referring to Loyalists he said “one or two have, what a great number ought to have done long ago, committed suicide”.( I ,for one, am grateful that my Loyalist ancestor did not take that advice.) Another telling fixture of Washington’s thinking was shown by his removal of all black soldiers when he took control of the rebel army, although he later reversed that position when he saw the use of black soldiers by the British forces.

The book reports that the estimate of the number of Loyalists ranged from 441,000 to 556,080 and that of the 772 battles and skirmishes during the revolt, Loyalists fought in 576 of them. The author then proceeds to provide details about many of these Loyalists and the role they played. These facts will not surprise Loyalists but may be a real eye opener to most Americans who prefer to believe that few people opposed the revolution. Those Americans may also prefer not to read that the first known atrocity of the revolution was committed in Concord by a young rebel who severed the skull of a wounded Redcoat with an axe and watched as the contents drained out during the two hours before the Redcoat died. Nor will they like reading about the methods of converting Loyalists which included the “smoking treatment” of locking a 65 year old man in a room with a lit fireplace and a blocked chimney, the confiscation of Loyalist’s property and possessions which started in Cambridge and, finally, the extensive use of a rope necktie hanging from a tree. Finally, they may not like to learn that the well developed American mastery of propaganda (e.g. “weapons of mass destruction”) is as old as their country.

It would be far from accurate, however, to leave the impression that only the rebels engaged in atrocities. It would seem that being a revolution as opposed to a war, both sides felt free to engage in uncivilized barbarity. The book deals at length with the role of Colonel John Butler and his son Walter, who did not survive the fighting. Their collective actions, while arguably committed for a justified cause, can hardly provoke pride from a more objective perspective. Of course, we all know that revolution is a nasty business.

“Tories” is a good book for those Loyalists and historians who want a very detailed analysis of each stage of the separation of the Colonies from the British Empire. It is clearly the product of very extensive research and is about as objective as one could expect from an American author. On the other hand, this review is probably as biased as you could expect from a Loyalist descendent.

A supplementary reference is available online a www.toriesfightingfortheking.com. 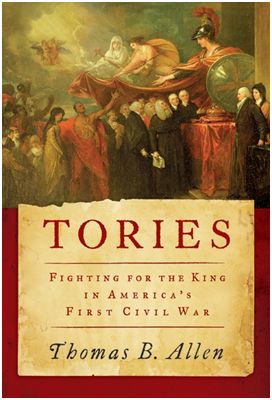