Commemorating the Loyalists in the 19th Century

“….we cannot hope to build a secure, a happy, a decent, a human future, if we neglect, if we repudiate, our past. This doesn’t mean living in the past. But it does mean preserving the values of the past as a basis for the development of the future…..”
– Senator, Eugene E. Forsey, UE; Hon. Pres. (1980-91)

“His Lordship intimated to the Council (at Quebec) that it remained a Question, upon the late Regulation for the Disposition of the Waste Lands of the Crown, whether the Boards, constituted for that purpose were authorized to make Locations to the Sons of Loyalists, on their coming to full Age and that it was his wish to put a Mark of Honor upon the families who had adhered to the Unity of the Empire, and joined the Royal Standard in America before the Treaty of Separation in the year 1783.”

This constitutes the first use of the expression “Unity of the Empire” and thus the qualification of “United Empire” together with the term “Loyalist”.

Commemoration of the Loyalist Struggle and Sacrifice

It might be said that the Loyalists were too busy at the job of nation-building and establishing themselves to worry about history. As early as the second decade of the nineteenth century, attempts to commemorate the founding fathers and mothers were being considered. Still, the disruption of the War of 1812-14 and the struggle to establish self-government in both Lower and Upper Canada, along with similar moves in the Maritime colonies, took priority.

It was not until the centenary of the Treaty of Separation in the latter part of the nineteenth century that commemorative association and activities began to evolve. Doubtlessly, the moves owed much to the commemorative activities in the Republic, which proliferated throughout the nation as their centenary arrived, as well as growing imperialist pomp and circumstance in Britain itself.

The United Empire Loyalist Association of Nova Scotia was formed on the 11th of May 1887. President, The Hon. Alfred Gilpin Jones and his executive held meetings in Halifax and Shelburne. The membership was some 30 members from across the Province.A Ladies Committee, chaired by Mrs. A. Hensley, advised and assisted in the planning for garden parties, teas and gala celebrations to commemorate important Loyalist important dates.

The Loyalist Refugee Association of New Brunswick was formed in 1846. Regrettably, detailed information on this short-lived organization is not currently available.

The United Loyalist Society of New Brunswickwas formed in 1883 to coincide with the centennial celebrations for the founding of Saint John. The Society was to falter because other organizations were involved in similar preparations. By 1889, the Society was reactivated under President, Sir Leonard Tilley, then Lieutenant-Governor of New Brunswick. By 1909, the membership totaled some 350 members. To have the Society reach the same level of importance as the St. George’s Society of England, the St. Patrick’s Society of Ireland and the St. Andrew’s society of Scotland was the aim of Mr. C.W. Weldon. This objective, however, was not reached, for membership began dropping due to members dying and moving out of province.

On May 1st, 1931, The New Brunswick Loyalist Society was formed under President Hugh H. McLean, then Lieutenant-Governor. In the same year, the Act to Incorporate was passed in the provincial legislature, with Mr. J.B.M. Baxter as provincial premier. In a letter to His Majesty King George V, the Lieutenant-Governor, recounting the Society’s history stated:

“It is to be noted that the descendants of the Loyalists are now among the leading men and women of the Dominion of Canada.”

The United Empire Loyalist Association of the Province of Quebec was formed on May 1st, 1895. The President was the Hon. Jonathon Saxton Campbell Wurtele, Judge of the Court of the Queen’s Bench, Officer of the Legion d’honneur in France. The Association had thirty-five members and meetings were held in Montreal, Sorel and other major centres of the Eastern Townships. Some members were Sir William Johnson, Sir Henri Joly de Lothbiniere and Mr. Robert C. Wilkins, great-grandfather of the current president of Heritage Branch.

Ten years prior to the formation of the United Empire Loyalist Association of Ontario, Loyalist descendants met to plan the centenary of the Loyalists’ arrival into what was to become Upper Canada, Canada West and Ontario. The meeting was held at Adolphustown in 1883. Dr. Canniff recommended that the centennial programmes for the Loyalists be celebrated in part with the Jubilee celebration for Queen Victoria. This recommendation was enthusiastically approved and committees were formed to organize celebrations in Adolphustown, Toronto and Niagara, sites of original settlement by the Loyalists who had endured so much for the “Unity of the Empire”.

The United Empire Loyalist Association of Ontario was formed on November 17th, 1897 and the former Lieutenant-Governor of Ontario, the Hon. John Beverley Robinson, was elected president.His service was very short due to his sudden death; the new Association and Province had lost not only a president, but a learned scholar and Canadian patriot. Dr. George Ansel Sterling Ryerson, M.L.A. succeeded as president, in which position he served until the United Empire Loyalists’ Association of Canada was incorporated by an act of the Parliament of Canada, in 1914.

The membership totalled about 250 members, residing in Niagara, Hamilton, Toronto and as far east as Kingston. Meetings were held three times a year, in Toronto or Hamilton to promote loyalist history in Ontario through education of the public. An active Ladies’ Committee of twelve women arranged meeting refreshments, teas and fund-raising events on the Association’s behalf. 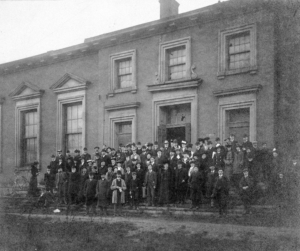