The Founding of the UELAC

As recounted earlier, the National Association came into being with a Federal Charter, passed by Parliament on May 27th, 1914. A copy of the Charter can be read here.

The one hundred and thirty years since the Treaty of Separation had seen the growth of a nation, from sea to sea, and a great scattering of the Loyalists descendants. The length and breadth of the new country made it difficult to unite the Loyalist descendants in the common cause of keeping the Loyalist history alive and telling it to their countrymen and to the world. In 1913, the various provincial societies met in Toronto to discuss their future. Col. George A.S. Ryerson strongly advised the delegates that the best solution rested in uniting local and provincial societies into a Dominion of Canada association. This advice was unanimously approved by the delegates, including, Dr. W.O. Raymond, New Brunswick; the Rev. Canon Alfred Brown, Halifax; Mr. George H. Ham, Montreal; Sir John Beverley Robinson, Edgewater, New Jersey; His Honour Hedley Clarence Taylor, Edmonton; Mr. H.S. Seaman, Winnipeg; Sir Charles Hibbert Tupper, Vancouver; Lieut. Col. George Alexander Shaw, Sir Alien Aylesworth and Lieut. Col. William Hamilton Merritt, all of Toronto. 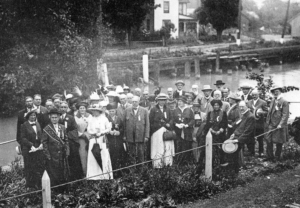 A gathering of Loyalist Descendants at Thorold, c. 1914

The meeting was chaired by Col. Ryerson, and drafted a constitution, to incorporate local and provincial societies into a united body, drawing up a set of by-laws for the purpose. An Act (Chapter 146, 4-5, Geo. V, 1914), May 27, 1914, was passed by the Parliament of Canada. The Prime Minister was Robert Borden. The Act incorporated “The United Empire Loyalists’ Association of Canada”, authorizing its operation in all Provinces and Territories of Canada, and to be controlled under a central body, based in the City of Toronto, Province of Ontario.

The Purpose (of the Association) as specified under the Charter was stated:

Early Years of the UELAC

Shortly after the Act to Incorporate the United Empire Loyalists’ Association of Canada was passed the Great War began on August 4th, 1914. This crisis caused a period of UELAC inactivity. During this interval, the Toronto Branch represented the Association, providing some continuity, attending to payments and correspondence on its behalf. By 1930, the executive encouraged the potential members from across Canada to join Toronto Branch and, in so doing, permitting them to be registered as regular members of the Association. When eight to ten members were enrolled in a given locality, a branch could be formed and the memberships and their fees transferred to the new branch. Association membership reached an estimated 3720 members in the early thirties.

Regrettably, this system of operating bore the stigma of the appearance that Toronto Branch was the paramount representative of the Association, i.e. was the Association, causing considerable friction within UELAC. This led to the New Brunswick, Nova Scotia and Alberta Loyalist societies withdrawing from the Association, becoming independent in the process with a drop of approximately one thousand members. The Association’s executive was forced to combine with the executive of Toronto Branch, primarily due to financial reasons for two years, after approval was sought from the remaining branches: Toronto, Hamilton, British Columbia, Governor Thomas Carleton, Vancouver, Brantford, Kingston, Saskatchewan and Manitoba.

Dominion Headquarters was housed, variously, in bank and law offices until the 1950s, when it shared accommodation with Toronto Branch at 20 Prince Arthur Avenue. In the early 1960s, the Headquarters was moved to 23 Prince Arthur Avenue, with Mr. E.J. Chard, acting as Chief Administrative Officer, 1964-87. Mr. Chard was also Dominion President from 1966-68. Mrs. Dorothy Chisholm succeeded Mr. Chard as Office Administrator, remaining until July 1996.

Dominion Headquarters was moved in October 1988, to The George Brown House at 50 Baldwin Street, Toronto, where it remains today. Since the mid-sixties, meetings of Dominion Council were generally held at Dominion Headquarters with the occasional meeting in other locations. Initially, the annual general meeting and convention were held in Toronto on the third Saturday in May. In the early seventies, branches were invited to host the meeting and convention, occasions which have evolved to include seminars, tours, banquets, soirees, etc., normally with a Sunday church service, as well.

The Loyalist Gazette (and Preceding Transactions)

The Association published its first journal, the Loyalist Gazette, in 1931, although Transactions were published in previous years. Lack of funds would have prevented continued publication in 1932, had not the Ladies’ Committee, Toronto Branch, provided printing costs and postage for 3,500 copies. In addition, the same Committee footed the bills for the printing of 1,000 leaflets to be distributed at the Association’s Canadian National Exhibition booth. The Association journal ceased publications in 1933. with Volume 3 No. 3.

Publication of The Loyalist Gazette commenced again in April 1963, with John Chard as editor.

Next in the History of the UELAC – Growth of the Association: Branches.