A plaque entitled “A Tribute to the Pioneers of Abercorn” is embedded in a huge field stone in Pioneers’ Park, Abercorn, Quebec south of Sutton.

This bilingual plaque honouring the Loyalist pioneers of Abercorn, Quebec area was unveiled on June 26, 2004 in Pioneers’ Park. The 20 by 30 inch plaque, dedicated under the auspices of L’Association de Culture et Patrimoine d’Abercorn (Association of culture and heritage of Abercorn), was designed by Les Creations le Bronzier Inc. of Cowansville . The plaque is embedded in a fieldstone which weighs more than 1000 pounds donated by Mrs Suzanne Coté-Stairs from her farm.

The ceremony of unveiling the plaque took place during the 75th Anniversary Celebration of the town of Abercorn. Four descendents of Loyalists named on the plaque were present at the unveiling: Louise Hall and Adelaide Lanktree descendents of Thomas Spencer and Betty Boroski and Rose White of Mapleton, Minnesota, USA descendents of Alexander Griggs. 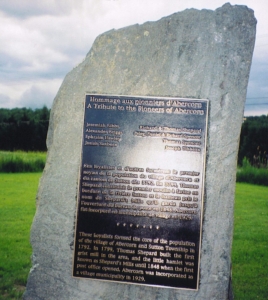 These Loyalists formed the core of the population
of the village of Abercorn and Sutton Township in
1792. In 1799, Thomas Shepard built the first
grist mill in the area, and the little hamlet was
known as Shepard’s Mills until 1848 when the first
post office opened. Abercorn was incorporated as
a village in 1929.”