This large monument and plaque was dedicated to Adam Young and his family by the Young Descendants and the Grand River Branch of the United Empire Loyalists’ Association of Canada on 12 September 1998. It is located in the Young Cemetery, Seneca Township, Haldimand County, Ontario (between Cayuga and York on Haldimand County Regional Road 54.) 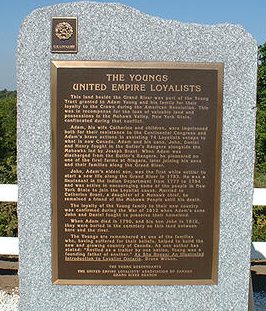 The inscription of the Plaque is as follows:

This land beside the Grand River was part of the Young Tract
granted to Adam Young and his family for their
loyalty to the Crown during the American Revolution. This
was in recompense for the loss of valuable land and
possessions in the Mohawk Valley, New York State,
confiscated during that conflict.

Adam, his wife Catherine and children were imprisoned
both for their resistance to the Continental Congress and
Adam’s brave actions in assisting 74 Loyalists to escape to
what is now Canada. Adam and his sons John, Daniel
and Henry fought in the Butler’s Rangers alongside
the Mohawks led by Joseph Brant. When Adam was
discharged from the Butlers Rangers, he pioneered on
one of the first farms at Niagara, later joining his sons
and their families along the Grand River.

John, Adam’s eldest son, was the first white settler to
start a new life along the Grand River in 1783. He was a
lieutenant in the Indian department from 1777 to 1784
and was active in encouraging some of the people in New
York State to join the Loyalist cause. Married to
Catherine Brant, a daughter of a Mohawk chief, he
remained a friend of the Mohawk people until his death.

The loyalty of the Young family to their new country
was confirmed during the war of 1812 when Adam’s sons
John and Daniel fought to preserve their homeland.
When Adam died in 1790 and his son John in 1812
they were buried in the cemetery on this land between
here and the river.

The Youngs are remembered as one of the families
who having suffered for their beliefs, helped build the
new and growing country of Canada. As one author has
stated: “Reviled as a traitor by one nation, Young was a
founding father of another” As She Began: an Illustrated
Introduction to Loyalist Ontario. Bruce Wilson