The oldest monument dedicated to the United Empire Loyalists of Ontario is located in the United Empire Loyalist Heritage Centre and Park, in historic Adolphustown, Ontario, now part of the Town of Greater Napanee. It is located along the Loyalist Parkway, formerly old Highway #33. The site marks the spot of the first landing of the Loyalists in Ontario in 1784 under the leadership of Major Peter Van Alstine UE. Shortly after their arrival a child died and group established the first Loyalist burial ground on the same site.

However, by Oct 13 1877, the Canadian Illustrated News Montreal reported that “in the old U.E. Loyalist burying ground can be seen the resting place of the first settlers, where may be noticed dilapidation par excellence, the boundary fence being down, and many of the enclosures (Hagerman’s in particular) lying in wild disorder. The headstone of ‘VanDusen’ measures its length on the ground as though it had got tired of the obituary business and wanted to go back to the less exalted a vocation of an ordinary stone, and will succeed in its efforts unless something is done to prevent it.” (sfredheritage.on.ca/Artadol.htm)

During the 1884 celebrations of Loyalist Settlement in Ontario, the provincial government selected the Adolphustown site for the first of their celebrations. The original Loyalist cemetery established in 1784 had been in deplorable condition, but was cleaned up by this time and a new obelisk shaped monument was unveiled on June 16th, 1884 to honour the loyalist landing site and the cemetery. This was in fact the first and oldest monument to the Loyalists in the province of Ontario. 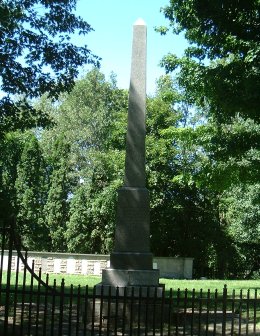 Obelisk at the Adolphustown Cemetery

IN MEMORY OF THE
U.E. LOYALISTS
WHO THROUGH LOYALTY
TO BRITISH INSTITUTIONS LEFT
THE U.S. & LANDED ON THESE
SHORES ON THE 16th OF JUNE
A.D. 1784

The three day celebrations from June 16th to 18th featured many prominent members from the Province. The Committee featured many well known loyalist names from the Bay of Quinte area. The full proceedings for the celebrations have been recorded in the book The Old United Empire Loyalists List, published originally in 1885 and since reprinted. Speakers included Lewis Bogart, A.L. Morden, Dr. William Canniff, David Allison, MP, and Sir Richard Cartwright and Lt. Gov. John Beverly Robinson. The cornerstone was also laid with full Masonic honours. Included in the celebrations were the 15th Battalion from Belleville, under Colonel Samuel Lazier, Picton Cavalry Troop, under Major Fred White, three military bands, and boatloads of visitors from Belleville to Kingston. On display was a banner from what was know as the Native Canadians Society from Belleville, a group which was to evolve into the United Empire Loyalists.

This event put the Adolphustown landing site and cemetery in a more prominent light. For several years, the Ontario Historical Society held their summer picnic at the site and arrived from Toronto by steamer boats. During the 1912 celebrations of Hay Bay Church, Methodist members also travelled to the Cemetery and landing site in the park.

In 1956, the cemetery was restored. Original grave markers were embedded in a stone wall and the area fenced. 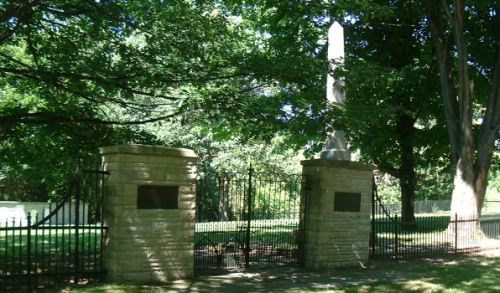 The plaque on the left gatepost reads:

THIS BURIAL GROUND WAS RESTORED
16TH JUNE 1956 BY
THE UNITED EMPIRE LOYALISTS’
ASSOCIATION (TORONTO BRANCH)
AND ADELAIDE MOWBRAY MCLAUGHLIN
U.E. LL.D.
That Canadians may remember the sacrifices of the Loyalists to preserve our British heritage.

The plaque on the right gatepost reads:

IN MEMORY OF THE BAND
OF LOYALISTS UNDER THE LEADERSHIP
OF MAJOR PETER VAN ALSTINE
WHO LANDED HERE 16TH JUNE 1784
MANY OF WHOM ARE BURIED WITHIN
IN UNMARKED GRAVES
Put off thy shoes from off they feet for the place
Whereon thou standest is holy ground. 3 Exodus 5

Also in 1956, the area became the first park in Ontario dedicated to the Loyalists when Premier Leslie Frost officially opened the Bay of Quinte UEL Memorial Cemetery and Park. Previously managed by Ontario’s St. Lawrence Parks Commission, it is now owned and operated by the Bay of Quinte Branch of the United Empire Loyalist Association of Canada.