On the eighth of November 1969, a plaque was dedicated to Major General The Hon. Aeneas Shaw UE in Trinity Park on Queen Street West in Toronto, Ontario. The plaque was made possible by the Ontario Department of Public Records and Archives, acting on the advice of the Archaeological and Historic Sites Board of Ontario. 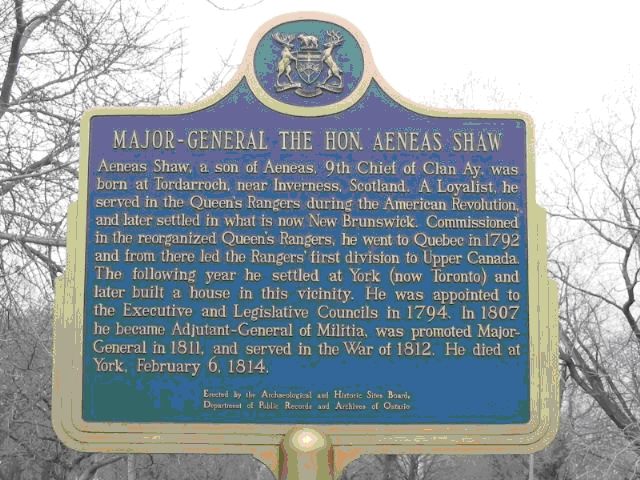 The text reads as follows:

Aeneas Shaw, a son of Aeneas, 9th Chief of Clan Ay, was born at Tordarroch, near Inverness, Scotland. A Loyalist, he served in the Queen’s Rangers during the American Revolution and later settled in what is now New Brunswick. Commissioned in the reorganized Queen’s Rangers, he went to Quebec in 1792 and from there led the Rangers’ first division to Upper Canada. The following year he settled at York (now Toronto) and later built a house in this vicinity. He was appointed to the Executive and Legislative Councils in 1794. In 1807 he became Adjutant-General of Militia, was promoted Major-General in 1811 and served in the War of 1812. He died at York, February 6, 1814.

Erected by the Archaeological and Historic Sites Board
Department of Public Records and Archives of Ontario.

A description of the official unveiling is from the Loyalist Gazette:

On a pleasant Fall day of the second Saturday in November, a large number of interested citizens and members of the U.E.L. Association gathered at 12 o’clock noon in Trinity Park, Queen Street West, Toronto, to witness an historical plaque unveiled in memory of the Honourable Aeneas Shaw.

Mayor Dennison and Alderman O’Donohue spoke briefly. The main address of the unveiling was given by our Dominion President, Dr. D. J. Dillane, who told the life story of the man we were honouring: how Shaw served under Simcoe in the Revolutionary War: his settlement first in the Saint John Valley of New Brunswick and his subsequent removal to York (Toronto) where he received a substantial crown grant of land: and the many positions he held both in the army and in the government which marked him as an able administrator and man of great ability. Trinity Park, where this plaque now stands and where Trinity College was one situated, was part of the crown grant and Shaw Street, to the west, is a reminder today of the magnificent part played by Shaw in our early history. Rev. W. D. F. Morris, Chaplain of the Governor Simcoe Branch, dedicated the plaque and the unveiling was performed by Mr. George Shaw, a direct descendant of Major-General the Honourable Aeneas Shaw U.E.