On Canada Day 1985, the descendants of the United Empire Loyalists commemorated the landing of their forefathers with a six-foot monument in Bedeque’s Central Park. Lieutenant Governor J. A. Doiron unveiled it with the assistance of Premier James Lee, and Paul H. Schurman and Lee Campbell, chairmen of the Bedeque Harbour Loyalists Committee. Mr. Schurman is a descendant of William Schurman who led the first Loyalist settlers to Bedeque. 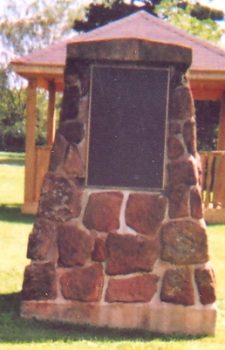