The Butler Homestead monument was unveiled on Sunday, May 18, 2008 in the newly- created Colonel John Butler Homestead Park in St. Andrews Glen on Balmoral Drive just off Regional Road 55, Niagara-on-the-Lake, Ontario. The foundations of the original Butler homestead were identified by lines of crushed rock in the grass giving a clear idea of the original building. Designed and built by Jon Jouppien of JK Jouppien Heritage Resource Consultant Inc., the four sided cairn was built with stones from Fort Niagara that were surplus to the building of the monument at the site of the Battle of Chippawa 1814. 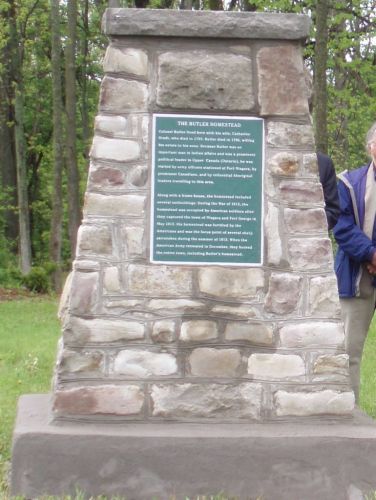 THE BUTLER HOMESTEAD
Colonel Butler lived here with his wife, Catharine Bradt, who died in 1793. Butler died in 1796, willing his estate to his sons. Because Butler was an important man in Indian affairs and was a prominent political leader in Upper Canada (Ontario), he was visited by army officers stationed at Fort Niagara, by prominent Canadians, and by influential Aboriginal leaders travelling to this area.

Along with a frame house, the homestead included several outbuildings. During the War of 1812, the homestead was occupied by American soldiers after they captured the town of Niagara and Fort George in May 1813. His homestead was fortified by the Americans and was the focus point of several sharp skirmishes during the summer of 1813. When the American Army retreated in December, they burned the entire town, including Butler’s homestead. 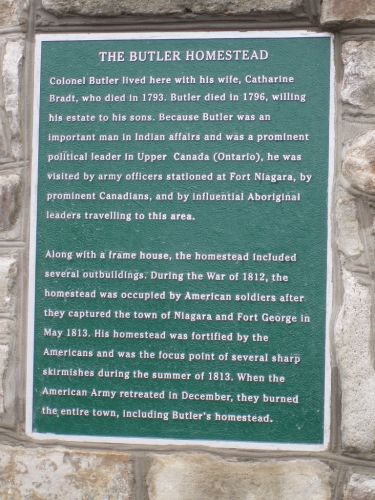 JOHN BUTLER, 1728-1796
John Butler was an army officer, Indian agent, and Loyalist leader and was one of the most important figures in the early years of Ontario.

The son of a British army officer, Butler moved to New York’s Mohawk Valley in 1742. He befriended William Johnson, a man who was instrumental in forging alliances between the British and the Six Nations Iroquois Confederacy. By 1755, Butler was an interpreter for the British Indian Department.

During the American Revolution, Butler formed a regiment of Rangers that operated out of Fort Niagara against the rebellious colonists led by George Washington. In 1778, Butler established barracks for his men on the west side of the Niagara River in what is now Niagara-on-the-Lake.

Following the revolution, he led the men of Butler’s Rangers from the newly independent United States to settle in Canada. Butlers Rangers and their families were the first non-Aboriginal settlers of the Niagara peninsula.

Butler lived on this site and remained active in Indian affairs, serving as the Deputy Superintendent of Indian Affairs to the Six Nations.

John Butler died on this site in 1796 and was interred in the nearby family burial ground. 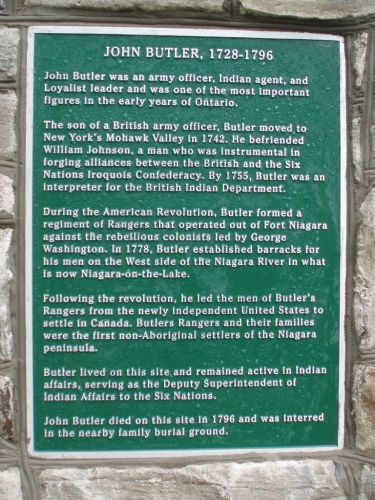 FINDING BUTLER’S HOMESTEAD
Following the War of 1812, knowledge of the exact location of Butler’s home was lost. The farm had become pasture and the ruins of the homestead remained hidden beneath the turf. When the development of a residential subdivision threatened to obliterate the ruins of the home of Niagara’s founding father, steps were taken to locate the exact site and preserve it for future generations. An archaeological excavation uncovered what had been buried for almost two centuries. The dig uncovered stone foundations and a treasure of artefacts ranging from prehistoric Aboriginal artifacts through military buttons and fragments of the fine china used when the Butlers entertained the upper classes of early Ontario.

Through the efforts of many people, the site of John Butler’s homestead is preserved for all time 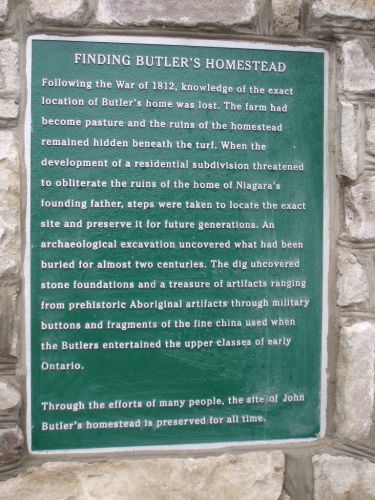 PLAQUE FOUR lists the honourary land grantees of the Butler Homestead who made the preservation and presentation of the homestead site possible. 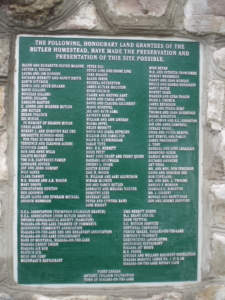 Honourary land grantees of the Butler Homestead (Click to enlarge)

Participating in the unveiling of the monument were Ron Dale, manager of Parks Canada’s War of 1812 Bicentennial Project, The Hon. Rob Nicholson, MP, Minister of Justice, Kim Caitor, MPP Niagara Falls, Lord Mayor Gary Burroughs, NOTL, Zig Misiak of Butler’s Rangers and Bernie Villamil of the Trillium Foundation. Music was provided by the Lincoln and Welland Regiment. Also present were a number of descendants of Col. John and Catherine Butler, members of UELAC and local heritage groups.