A Province of Quebec plaque commemorating Loyalist settlement in Caldwell Manor was mounted on a boulder which in turn was embedded in a raised cement base in MacCallum Park, Noyan, Quebec in 1971. 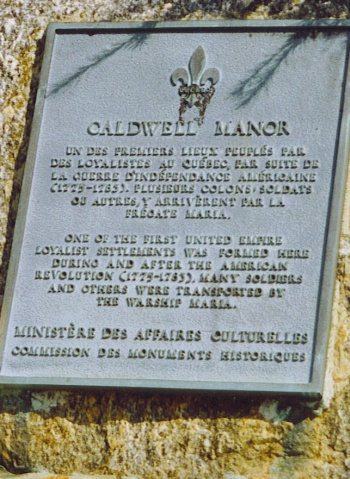 After a picnic lunch, inspection of the old Derick house and a visit to St. Thomas Anglican Church, the unveiling ceremony got under way in the park across from the church.

Chairman Herb Derick welcomed the large gathering with appropriate remarks. Mr. Norman Simpson was then asked to say a few words. He spoke on the significance of the plaque about to be unveiled pointed out that it was to commemorate all Loyalists who came to Canada from the U.S. and that our thoughts go back to those hardy pioneers who settled in this part of the country.

Mr. Wm. Taylor, Past President, and K.D. Tree,* President of the Missisquoi County Historical Society, then unveiled the plaque, which drew many favourable comments from those present. After a short speech by Mayor MacCallum, welcoming all to Noyan for this important occasion, he called on Mr. Yves Forest, M.P. for Missisquoi for a speech which was greatly enjoyed.

The highlight of the afternoon speeches was when Mr. Ed Struthers, Mayor of Stanstead, Que., who grew up in Noyan, gave a very interesting and detailed account of the years before, during and after the American Revolution when the first settlers arrived in Noyan and Caldwell’s Manor, present-day Clarenceville. This had involved a great deal of work and research and many facts unknown to many of us were brought out. [See the Loyalist Gazette, Vol. IX, No. 2, Autumn 1971, for excerpts.]

A hearty round of applause followed after the speaker concluded his talk by reading the wording on the plaque and thanking the mayor and council of the Parish of St. Thomas for erecting the boulder and cement base for the plaque. He was thanked by Chairman Derick and thus brought to a close a very pleasant outing on a beautiful sunny June day climaxed by a delicious lunch served by the ladies of the U.E.L. in the Town Hall.

ONE OF THE FIRST UNITED EMPIRE
LOYALIST SETTLEMENTS WAS FORMED HERE
DURING AND AFTER THE AMERICAN
REVOLUTION (1775-1783). MANY SOLDIERS
AND OTHERS WERE TRANSPORTED BY
THE WARSHIP MARIA.