A small memorial is dedicated to Charles Green, “One of the Kings Rangers, UEL”. The stone is located on the outside of the fence facing Lundy’s Lane, just east of the Stone Cairn. In the 1980’s a road survey crew was drawing up plans for the widening of Lundy’s Lane when they came across the grave. In light of the graves location, the road was narrowed by two feet so that the grave could remain untouched. Charles Green died in 1827 at the age of 87.
(Information from NiagaraFalls.ca) 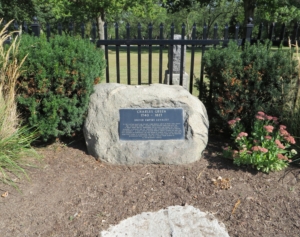 “IF THE CAPTAIN WANTS ME. HE MAY COME HIMSELF AND IF HE DOES I WILL SHOOT
HIM.” WITH THESE WORDS. CHARLES GREEN REFUSED INDUCTION INTO THE
N. JERSEY REBEL MILITIA. IMPRISONED. HE ESCAPED AND JOINED THE “KING’S
RANGERS”. A LOYALIST UNIT. HE “SUFFERED VERY CONSIDERABLY BOTH IN PERSON
AND PROPERTY”. AT WAR’S END HE WALKED FROM N. JERSEY LEADING HIS WIFE AND
TWO CHILDREN ON HORSEBACK. HIS WIFE REBEKAH. BURIED NEXT TO HIM. GAVE BIRTH
EIGHT DAYS LATER TO A DAUGHTER. THE FIRST WHITE CHILD BORN ON THE FRONTIER
HE DONATED THESE LANDS. PART OF A GRANT FROM GEORGE III
TO THE METHODIST CHURCH. 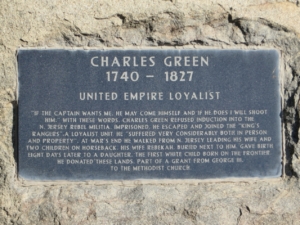