In 1933, the United Empire Loyalists were recognized for their prominent role in Canada’s development with the designation of a National Historic Event of Canada. In 1934 a plaque was unveiled in the Cornwall Post Office.

Transcription of the older 1934 plaque:

Commemorating the unswerving fidelity and eminent services of the Royal Highland Emigrants, the King’s Royal Regiment of New York, the Loyal Rangers, and the King’s Rangers, in the defence of the city and province of Quebec, 1775-1783. In later years they subdued the wilderness and laid the foundations of this province. 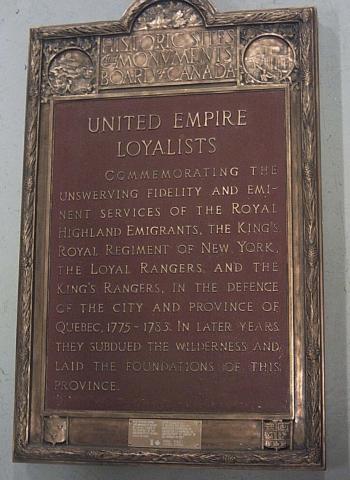 On August 12, 2018, the plaque was re-dedicated and moved to become a part of the Stormont, Dundas and Glengarry Historical Society Collection at the Cornwall Community Museum. 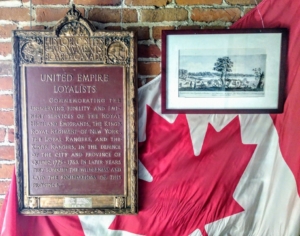 The spirit of the Loyalists was duly honoured in a ceremony re-dedicating a plaque at Simon Fraser Library, Cornwall, Ontario, in June this year. [1985]

This plaque, which had hung for many years in the Cornwall post office, was re-dedicated by the Stormont, Dundas, and Glengarry Historical Society as part of the U.E.L. Association of Canada’s four day convention. It was unveiled by Mr. John Eaman, a native of Cornwall area and a Past President of the U.E.L. Association. The inscription credits the Loyalists with defending the settlement, the province of Quebec and with laying the foundation of the province of Ontario. This plaque was mounted with the flags of our history – the Loyalist, the Union Jack, the Red Ensign, and the Maple Leaf and placed in a lighted alcove of the library.

Mr. Stanley McNairn, Past President of the Cornwall U.E.L. Branch pointed out that the Loyalist brought few material goods but they did bring a determination to survive and carve a place for themselves out of the wilderness.

The Rev. Steve Olson of St. Matthew’s Lutheran Church commended the Association for making sure the past is not forgotten and our heritage is preserved. He quoted from a prayer inscribed in the Covenanter’s Church in the maritimes – part of which was: Father God, we keep forgetting what our forefathers have done for us; we eat food from farmlands we did not develop; we enjoy freedoms we have not earned…make us grateful for our heritage.

On this program Mrs. Mildred Leitch, President of St. Lawrence Branch, and the remarkable host of the Convention presented the library with the new edition of the branch’s project book, The King’s Royal Regiment of New York containing the regimental rolls prepared by Mr. Gavin K. Watt and the branch.

The Simon Fraser Centennial Library has since been closed. Parks Canada has an application letter for custody of the original plaque made by Robert Pearson, President of the Stormont, Dundas and Glengarry Historical Society requesting that the United Counties Museum (now the Cornwall Community Museum) be named as the curator of the plaque and site for mounting. The request was made around June 9, 1981 and the final agreement with Parks Canada signed on August 20, 1981. It came to be dedicated and displayed at the Simon Fraser (Cornwall Public) Library in 1985 largely due to the advocacy of Stanley McNair who was both a member of the U.E.L. and the Historical Society . The original 1934 plaque is currently housed at the new Cornwall Public Library, the former Federal Building.

The following text was prepared by the Special Committee on the Revision of Unilingual Plaques – 1973 to 1977. On 20 June 1981, the bilingual plaque was mounted on the then Federal Building 45 Second Street, Cornwall. The building now serves as the Cornwall Public Library.

The United Empire Loyalists played a prominent role in the development of this country. In particular, the officers and men of the Royal Highland Emigrants, the King’s Royal Regiment of New York, the Loyal Rangers and the King’s Rangers, displayed unswerving fidelity in defence of the city and province of Québec during the American War of Independence (1775-83). In later years, they subdued the wilderness to create new homes and to lay the foundations of the province of Upper Canada.

Historic Sites and Monuments Board of Canada 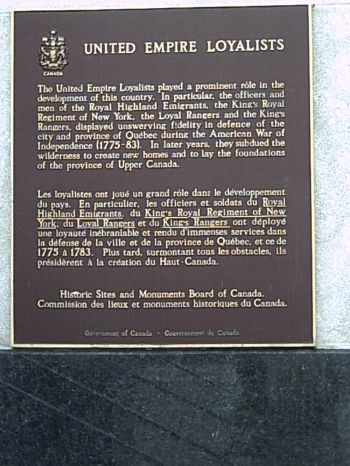