Placed to face the United Empire Loyalists monument in Prince’s Square, Hamilton, the plaque stands in a bed of red geraniums planted annually by the City of Hamilton. The use of these flowers perpetuates a tradition started by the late Ruth Redmond of Lundy’s Lane to honour those who died in the War of 1812. 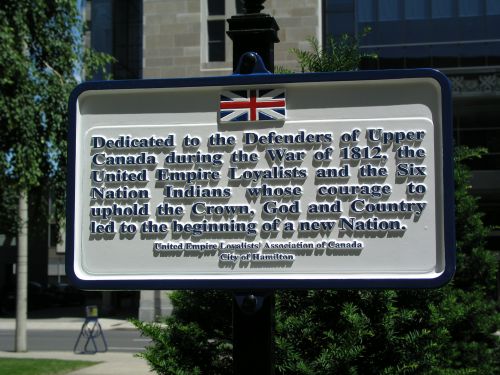 It was dedicated by Hamilton Branch Past President Fred H. Hayward UE and Rev. Dr. John A. Johnston, chair of the Joint Plaquing Sub-Committee of the City of Hamilton on 19 June 2004, UEL Day in Ontario.

Prior to that date, Dr. Catherine L Tanser UE, during her presidency from 1998 to 2000, had received permission for a temporary plaque with the same text.