On August 6, 1983 Nova Scotia Lieutenant Governor John E Shaffner dedicated a cairn in Loyalist Park along the waterfront on Montague Row in Digby. 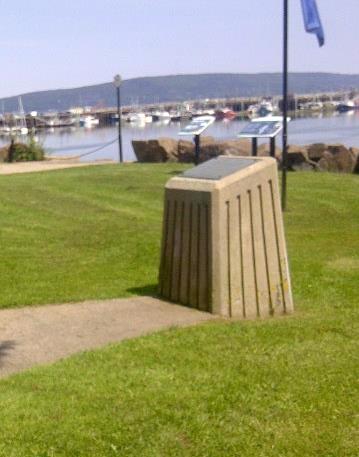 The inscription on the cairn reads:

LOYALIST PARK
NEAR THIS SITE IN JUNE 1783,
1200 UNITED EMPIRE LOYALIST SETTLERS
LANDED UNDER THE PROTECTION OF
REAR ADMIRAL ROBERT DIGBY
IN RECOGNITION OF THIS EVENT
THIS PARK IS DESIGNATED AS LOYALIST PARK
THE WALKWAY TO THE LEFT AS ADMIRAL’S WALK
DEDICATED BY
THE HONOURABLE JOHN E. SHAFFNER
LIEUTENANT GOVERNOR OF NOVA SCOTIA
ON 6 AUGUST, 1983

In addition to the cairn, four cannon, the Digby pride in United Empire Loyalist history is also explained in a series of information panels donated by Nova Scotia Tourism, Culture and Heritage, Fundy Coastlines Partnership. 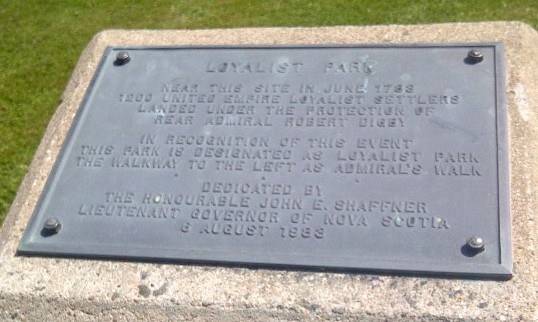 Before The Ships Arrived

In the spring of 1783, there were very few people on these shores. For thousands of years, the Mi’kmaq First Nation had camped here during the spring and summer as they fished the waters and harvested the shellfish. There were a few scattered “Planters”, settlers from New England who had arrived a decade before, living in the area then called Conway. Port Royal was home to some French settlers, but other than these folk, the land was heavily forested and pristine to the very edge of the water.

In early June of that year, the Annapolis Basin became alive with the arrival of three ships, Rear Admiral Robert Digby commanding from his flagship, the Atalanta. Digby led this first flotilla of over-crowded ships from New York to Nova Scotia. On board were 1,300 United Empire Loyalists, American colonists who had remained devoted to the British crown during the American Revolution. Because of that loyalty, they were no longer welcome in America. They were forced out of their country, and resettled by the British government in Canada. Other ships soon followed. Loyalists were the first of Canada’s political refugees, and our first true British settlers. In all, about 32,000 (or 45%) of the 70,000 Loyalists who came to Canada, arrived in Nova Scotia.

For many, it was a violent parting from their homes, some were tarred and feathered or driven from their communities by mobs hurling rocks. Their property was confiscated; many were publically humiliated, physically attacked, and some were even murdered.

In other instances, Loyalists were able to dismantle their homes and take house frames and timbers, household goods, and valuables with them to what was to become their new home.

In spite of the land and supplies provided by the British government, the first winter was a difficult one. Many lived in simple log huts while awaiting the following year’s construction of their larger permanent homes, and were ill prepared to endure a Nova Scotian winter; there was suffering and some death.

Spring brought renewed hope and dedication to their new lives. Determination, hard work, and the arrival of other vessels containing Loyalists saw the beginning of a real community. Soon, the people unanimously petitioned Governor Parr in Halifax to rename the settlement Digby, after the much-respected Admiral who had brought the first settlers and had himself constructed a home near the water.

It did not take long before these industrious Loyalists realized the incredible bounty the Bay of Fundy was delivering to their doorsteps, and the fishing industry, which has been the backbone of Digby, was established. 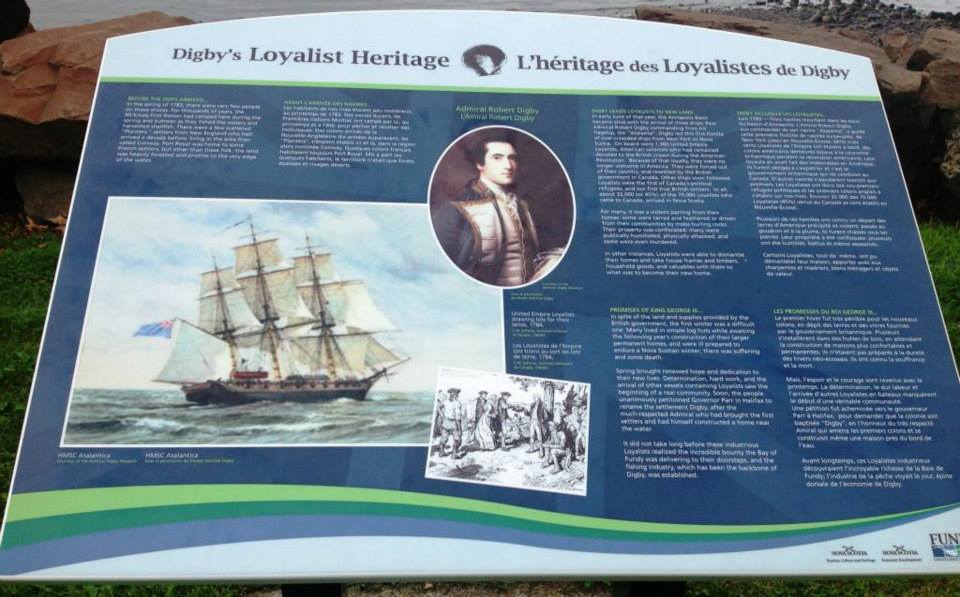 When the American colonies began their war of independence, the British offered freedom to African American slaves who would serve in units of the British military. When the Loyalists took refuge in Nova Scotia, several Black Loyalists, some freeman and many freed only because of the war, came with them. In the chaos of evacuating the …Loyalists, however, many American slave owners attempted to recapture their former slaves; some succeeded. Approximately 3,000 Black Loyalists made it to Nova Scotia. Sadly the British promise of good land and assistance to get established proved somewhat false, as the best land and water access was given to their white counterparts, leaving the Black Loyalists often rocky, unfertile inland acreage. Still facing discrimination, some Black Loyalists moved to the Annapolis Valley, other parts of Canada or to England. In 1792, 1,192 Black Loyalists from Digby, Annapolis, and Saint John left Halifax on a government ship bound for Sierra Leone, Africa.

Thomas Peters was a fugitive slave originally from Africa. In 1776 he left Wilmington, North Carolina and joined all black regiment called the Black Pioneers and achieved the rank of sergeant. The Black Pioneers were among the Loyalists transported from New York to Nova Scotia. Peters became a resident of Brindley Town (now Acaciaville) near Digby. He received rations from the government for a time, but he could not secure farmland and moved to Saint John, NB. Unfortunately, the Black Loyalists did not fare any better there, and Peters bacame a representative and advocate. Eventually, Thomas Peters became instrumental in leading the exodus to Sierra Leone.

To His Excelency Thomas Carleton Esquire Lieutenant Governor and Commander in Chief of the Province of New Brunswick & Peition of Thomas Peters, a Black Man Serjt. of the Late Black Prs. who Serv’d his Majesty 7 years.

We the Free Blacks of the Province of New Brunswick having receiv’d information by a Letter from the Reverend Mr. Joshua WEEKS; directed to the free Blacks of Brinley Town in Nova Scotia. That Charitable Collections have been made in England for the purpose of erecting and supporting free Schools, where the Children of free Blacks may be instructed without expence, in Learning and Religion –

Being filled with gratitude to the said Charitable Society, and sensible of the great Blessings and benefits we shall experience by being brought from a state of ignorance and darkness, to an enlightened understanding and a rectified Heart –

Do hereby solemnly and sacredly, bind ourselves each to the other; that we will to the best of our knowledge and Ablilities strictly Adhere to the Rules and Regulations of the Episcopal Church of England as Establis’d by law.

That as Christians we will be quiet and chaste in our demeanor; Peacable and Obedient to the ruling Powers; and submissive to all the dispensations of Providence-

And whereas we are sensible that it wou’d be to Our Advantage if our Affairs were to be transacted by One Person Nominated and Appointed to Act for and in behalf of the whole of us; in all matters both Civil and Religious –

We do by the Presents Nominate and Appoint Thomas PETERS, to be our Attorney for the Purpose aforesaid and do hereby Promise and engage to abide by, hold for firm and Effectual, and ratify all and whatsoever the said Thomas PETERS shall for us and in our behalfdo in the Premises by Virture hereof – 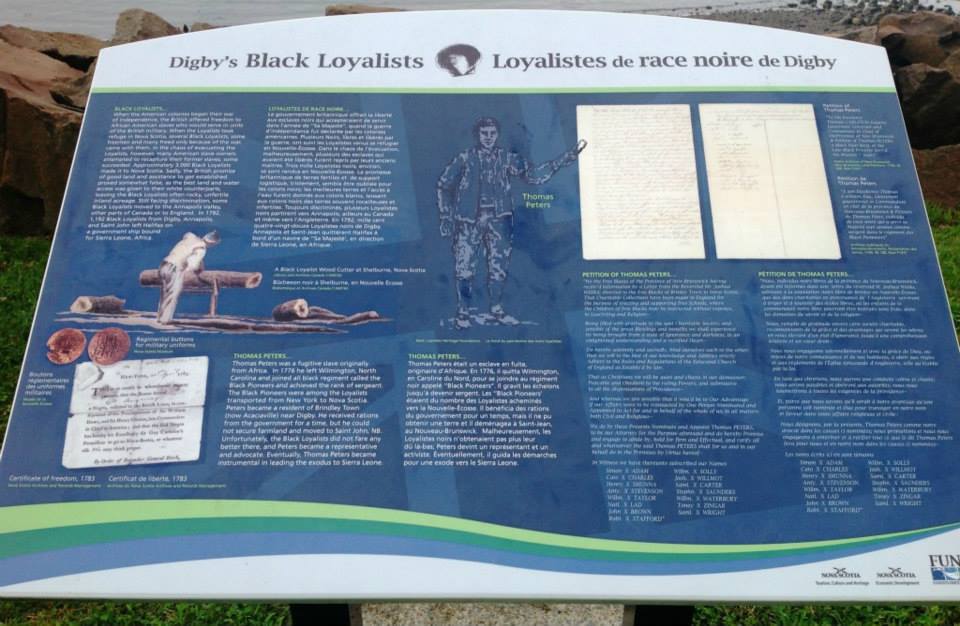 Information on the cannons in Loyalist Park can be found here.