This cemetery is located at 505395 Old Stage Road on Lot # 12, Concession #4 in Oxford Centre, five miles southeast of Woodstock in East Oxford Township. In 1954, a bronze plaque was dedicated to the first white settlers in East Oxford. 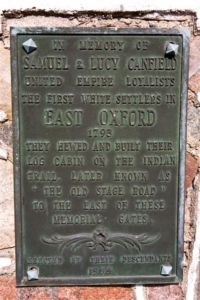 The following information is taken from an article entitled “Gateway Plaque Honours Pioneers,” by Mary Mark.

On one of the fine stone pillars forming the gateway to the old Pioneer Cemetery in the village of Oxford Centre, five miles southeast of Woodstock, a bronze plaque arrests the attention of the passer-by. Its inscription honours the memory of the first white settlers of East Oxford Township whose bones repose in the quiet graveyard beyond.

The plaque reads: “In memory of Samuel and Lucy Canfield, United Empire Loyalists, the first white settlers in East Oxford, 1793. They hewed and built their log cabin on the Indian Trail, later known as ‘the Old Stage Road,’ to the east of these Memorial Gates. Erected by their descendents, 1954.”

The plaque states the story of Samuel and Lucy Canfield simply, but the very brevity bears an impact. Imagination can well fill in the details of the hardships encountered as they traveled the primitive Indian Trail in the early days, and the courage and endurance it took to build their home, clear the land, and raise a family in the wilderness.

The only means of travel was by lumbering stage coach drawn by four horses. In time the home of this pioneer couple became one of the regular stops for the coach as it passed through the country from Vandecar to Beachville on the winding road which is still referred to as “The Old Stage Road.”

Samuel and Lucy Canfield had three sons and they all lived in the district. Through the years many of the Canfield family resided in East Oxford and eventually the descendants were found throughout the county.

Samuel and Lucy Canfield died in the early years of the nineteenth century – it is believed around 1803 and 1804 – and they were buried in a plot on a hillside near their original log house. Their graves were surrounded by a high picket fence and marked by a wooden slab on which were their names, in painted letters, with a brief history.

The grave remained intact for many years. Then it so happened that workmen in a nearby gravel pit inadvertently undermined the old graves exposing the bones. A grandson of the couple, Earl Canfield, who at that time lived on the farm across the road, had the remains reburied in what was then called the Old Methodist Cemetery (now the Pioneer) in Oxford Centre, where many other members of the family lie. The old wooden slab which marked the original site was again erected over their graves, but was removed some time later and was never afterwards recovered.

Fortunately, the information had been copied from it by a great, great granddaughter of the couple, Mrs. Carrie Canfield Ede now living in Woodstock. As a child she had many times played in the vicinity of the hillside plot, and with her companions had peered through the high picket fence at the ancient graves.

She remembers vividly the appearance of the wooden marker with its painted lettering which had preserved the wood underneath. Therefore the original details of the first white settlers of East Oxford were rescued from oblivion a century and a half later and are now to be perpetuated on the Memorial Plaque, a sincere tribute to Samuel and Lucy Canfield from their descendants. 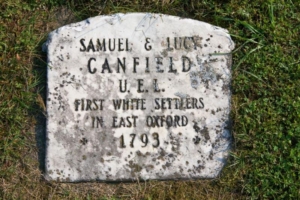 In September 2008, the Grand River Branch UELAC erected one of its United Empire Loyalist Burial Ground Plaques at this cemetery: 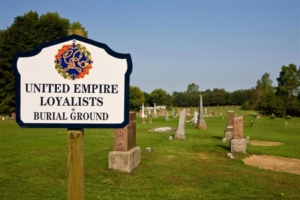