A plaque, embedded on a concrete base, dedicates the Bur Oak planted on the grounds of the Alberta Legislature to commemorate the visit of Her Majesty Queen Elizabeth II in 2005 and in celebration of Alberta’s 100th anniversary as a province. With strong reference to the United Empire Loyalists, this monument was made possible by the Edmonton and Calgary Branches UELAC in Alberta. 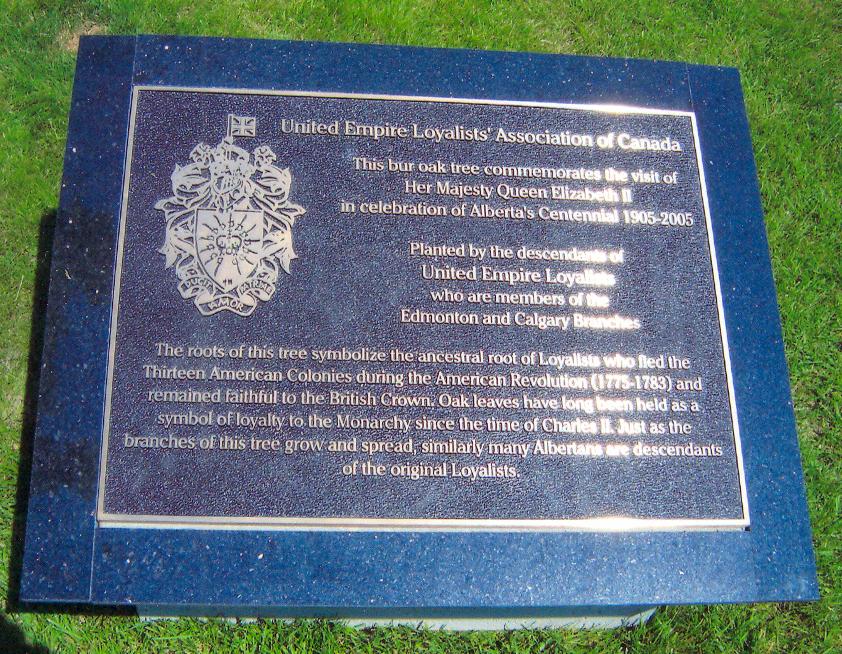 The wording on the plaque is as follows:

The roots of this tree symbolizes the ancestral roots of
Loyalists who fled the Thirteen Colonies
during the American Revolution (1775-1783) and
remained faithful to the British Crown. Oak leaves have long been
held as a symbol of loyalty to the Monarchy since the
time of Charles II. Just as the branches of this tree
grow and spread, similarly many Albertans are
descendants of the original Loyalists.

This Alberta project was undertaken first by Past President Al Dodds and followed up by Shona Wards UE. She and her committee received Alberta Government permission to plant a Bur Oak tree on Alberta Legislative ground in 2005 in recognition of a visit by Queen Elizabeth to commemorate Alberta’s 100th birthday. A small plaque was placed at the base of the tree in 2007 to acknowledge the Royal visit. 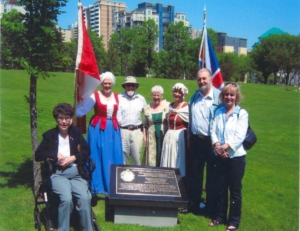 Subsequently, Shona Wards presented a plan to place a larger plaque at the tree and invite the Calgary Branch to participate. Both Branches approved. Financial assistance in the form of Grants from UELAC Dominion was received for both Edmonton and Calgary along with donations from both Branch members. 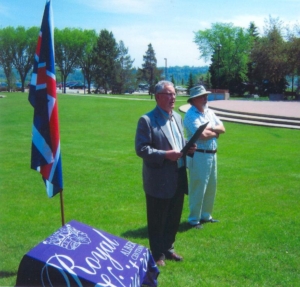 The Committee got the plaque cast and, with assistance from the Alberta Government, had the plaque and base placed at the Bur Oak tree location. The target date was 19 June 2010, to coincide with a Proclamation from the Mayor of the City of Edmonton declaring June 19th as United Empire Loyalist Day in Edmonton. On behalf of the Mayor Stephen Mandel Councillor Ed Gibbons presented the Proclamation to Edmonton Branch President Rev. Dr. Bruce Miller at a gathering of Edmonton and Calgary members. The Calgary Branch was represented by Treasurer David Hongisto and his wife, Barbara.