This plaque or monument is on land known in Fredericton as “The Green”, which is a strip of park land between Waterloo Row and the Saint John River. The strip of land is maybe a kilometre long, and fairly narrow on its westerly end, widening out as you go easterly on Waterloo Row where there is a baseball diamond for younger players, and soccer fields used by youngsters, on The Green. The monument is beside Waterloo Row at Alexandria Street. Something has been laid on the stone above the plaque, apparently melted and run down the left side of the plaque, which has caused the black stain down its left side. My guess is that it cannot be easily cleaned, but maybe we can try.

There is no sign of a gravestone in the area, and there never has been in my memory going back to the late 1940s, but it is said a few Loyalists (and perhaps others) who died soon after their arrival were buried somewhere near the monument, and the Fredericton City map is marked “Loyalist Cemetery” about where the boys play baseball. Otherwise there is no sign of a burial ground, and no sign identifying a cemetery. 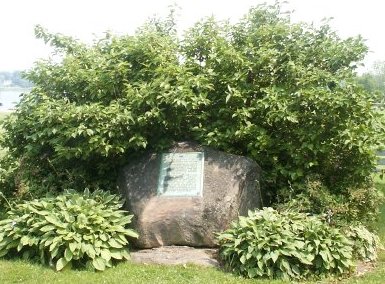 In the presence of a large representative gathering, a boulder monument in honour of Fredericton’s first English-speaking settlers and the real founders of the city, a band of United Empire Loyalists, who landed here one hundred and forty years ago, was formally unveiled by His Honour Major-General Hugh H. McLean, K.C., LL.D., VD., Lieutenant Governor of New Brunswick, on Sunday afternoon. After unveiling the monument His Honour read the inscription on the bronze tablet, and then delivered a brief but forcible address in praise of the Loyalists and warmly commending the action of the citizens of Fredericton in honouring their memory. The other speakers were: Hon. L. P. D. Tilley, Premier of the Province, and His Worship the Mayor of Fredericton, W. G. Clark. The speeches were most appropriate to the occasion and were listened to with marked attention.

A detachment of uniformed militia numbering about one hundred and twenty men, representing three branches of the service, cavalry, artillery and infantry played a very important part and did much to make the affair a marked success. The artillery detachment fired a salute of twenty-one guns from a position near the bank of the river, while the infantry fired a few de joie, and the band played the National Anthem.

The monument or cairn is located on the green off Waterloo Row and just opposite the intersection of Alexandria Street, and appears to excellent advantage from the street. Nearby is the old cemetery, where a number of Loyalists who perished during their first winter in Fredericton are laid to rest. The boulder has a height of nearly five feet and presents a hard rugged appearance, truly significant of the spirit of Loyalist pioneers.

Previous to the unveiling, the Lieutenant Governor, members of the committee and the military contingent attended the special service at the Cathedral in honour of the occasion. 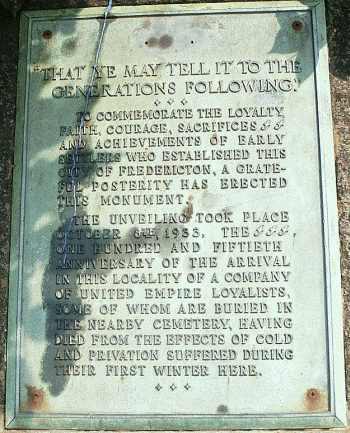 From the Loyalist Gazette Vol. XXI, No. 1:
This (Spring 1983) edition refers to “Two burying grounds in Fredericton were used by Loyalists who settled in old St. Anne’s 200 years ago. The smallest, between Waterloo Row and the banks of the Saint John River, has several illegible and broken stones. They mark the graves of some of the Loyalists who did not survive their first fall and winter (1783-1784) in New Brunswick. The York-Sunbury Historical Society erected a large modern stone monument (with cross) in 1934 to the memory of the unidentified deceased. Although title to the property is uncertain, the City of Fredericton endeavours to keep the tiny enclosure trim and tidy: a sign is posted at the riverside entrance.”

THAT YE MAY TELL TO THE
GENERATIONS FOLLOWING
***
TO COMMEMORATE THE LOYALTY,
FAITH, COURAGE, SACRIFICES
AND ACHIEVEMENTS OF EARLY
SETTLERS WHO ESTABLISHED THIS
CITY OF FREDERICTON, A GRATE-
FUL POSTERITY HAS ERECTED
THIS MONUMENT.
THE UNVEILING TOOK PLACE
OCTOBER 8TH, 1933, THE
ONE HUNDREDTH AND FIFTIETH
ANNIVERSARY OF THE ARRIVAL
IN THIS LOCALITY OF A COMPANY
OF UNITED EMPIRE LOYALISTS,
SOME OF WHOM ARE BURIED IN
THE NEARBY CEMETERY, HAVING
DIED FROM THE EFFECTS OF COLD
AND PRIVATION SUFFERED DURING
THEIR FIRST WINTER HERE.
***