The Joseph Brant Memorial cost $16,000 and was unveiled in Victoria Square October 13 , 1886 by the Hon. John Beverly Robinson , Lieutenant Governor of Ontario. The cornerstone was laid earlier on August 11, 1886, by Chief Ka-non-kwe-yo-teh.

Victoria Square in Brantford, designed by the British born architect John Turner, is laid out in the plan of the Union Jack Flag with four diagonal paths intersecting at the centre where the Joseph Brant Memorial was unveiled in 1886 at a cost of $16,000. 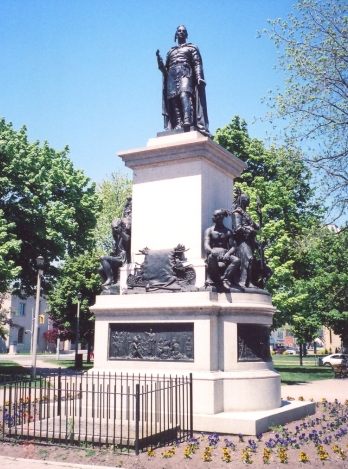 The memorial consists of a colossal statue of Brant, nine feet in height, two groups of three life sized figures each, and two trophies flanking the sides of the upper base, and four bassi-relievi upon the lower base, which terminates in a step upon the ground line.

The pedestal is of gray granite, quarried near Penryn, Cornwall, England and weighs slightly less than fifty tons. The stone is of the very finest quality and chosen with regard to a coarse grain.

The right-hand group as one faces the memorial shows chiefs of the Mohawk, Tuscarora, and Oneida Nations, furnished with the scalping knife, spear, and pipe of peace. The left-hand group shows the Seneca, Onondaga, and Cayuga Natives, with the bow and arrows, war-club, and flintlock gun. The trophies consist of artistic arrangements of their weapons and instruments, including snowshoes and lacrosse sticks. The totems of the Six Nations, the bear, the wolf and the tortoise, are introduced in the memorial, especially at the request of the Indians themselves.

On the front of the lower base is a bas-relief, showing about 15 Indians engaged in a war dance. At the back another relief shows Brant addressing the chiefs in council.

Two circular reliefs at the sides are devoted to the bear, with winter Canadian scenery, pines, etc., and the owl with maple tree foliage etc.

The trophy at the back of the memorial exhibits the designations of the six tribes or nations and upon the trophy in front is inscribed in bold characters the single word “Thayendanegea”.

Her Majesty’s Government recognized the importance of the work by granting 13 bronze cannon weighing about 600 pounds each, to be melted and used in the casting of several statues. Some of these guns were over a hundred years old, formerly cast at Woolwich and a number of them were in use during the Crimean War.

The sculptor, Percy Wood of London, England, received his education at University College, London, England, and studied medicine for some little time. The knowledge of anatomy thus acquired has doubtless proved serviceable in the profession which he subsequently adopted.

The inscription at the memorial reads:

Unveiled October 13th by the Hon. J. B. Robinson, Lieutenant-Governor of Ontario.

Joseph Brant (1741-1807) was born on the banks of the Ohio River. Brant’s first appearance as a warrior was at the Battle of Lake George, where the Six Nations, under their chief, Hendrick, and Sir William Johnson in command of the colonial troops, repulsed a formidable advance of French troops composed of the old veteran regiments of France. At this engagement, which was most severe, a young Indian made himself conspicuous in the fight, so much so, that after the battle was over, his brave conduct was reported to Sir William Johnson, who sent for him.

He found him to be a tall young Indian named Brant, very intelligent but uneducated, being at the time only 14 years of age. Sir William Johnson determined to have him educated, and for that purpose placed him under the instruction of Dr. Wheelock, where Brant remained until he had secured a good English education.

After finishing his studies, he devoted his whole time to the welfare of his people, translating the Gospel of St. Mark and the Common Book of Prayer into the Mohawk language for their benefit and doing every thing. He could do to promote civilizing influences among them. During the American Revolutionary War, Brant and the Six Nation Indians refused all temptations and remained true and loyal to their treaties with the crown.

While his role as the warrior was his most native characteristic, he was outstanding as Indian adviser and mentor of his people, Indian affairs agent, diplomat to the British and American governments on their behalf, captain in the British Army during the American Revolution War, a biblical and liturgical translator, and builder of Anglican churches. When he died, he was buried at his home in Burlington but was re-interred beside Mohawk Chapel in Brantford in 1850. Brantford and the County of Brant are both named after him.

Joseph Brant encouraged Loyalist settlement. He sold or leased land to settlers and the revenue was invested to provide an income for the Six Nations.