A wall plaque in downtown Kingsville, ON commemorating the settlement of United Empire Loyalists on Lot 1 Western Division, dedicated on 20 June 2009 as a project to mark the 25th anniversary of the founding of the Bicentennial Branch UELAC. It is secured on the south west corner of Main Street and Division Street. 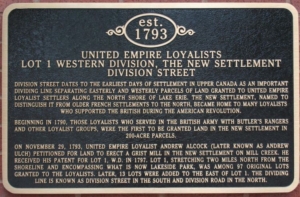 It has been the dream of Bicentennial Branch, since its formation in 1984, to mark the founding of the New Settlement with a permanent plaque so that future generations of this area will know and not forget our rich Loyalist history. This dream was realized on Saturday, June 20, 2009.

In honour of Loyalist Day in Ontario and to celebrate the 25th Anniversary of Bicentennial Branch more than seventy five people gathered at Kingsville Town Square for the dedication of a historical plaque honouring the first land grants to the United Empire Loyalists of the New Settlement.

The plaque was unveiled by Branch President Margie Luffman UE and Margaret Lewis UE, Branch Charter Member and Past President.

More information on the history of the New Settlement and the Plaque Dedication event is available on the Bicentennial Branch website: to view photos of the event, look in the Photo Gallery for “2009 Plaque Unveiling”.