This plaque which marks the landing place of the Loyalists in 1784 is located in the United Empire Loyalist Heritage Centre and Park, just off the Loyalist Parkway (Old Highway #33) at Adolphustown, Ontario. 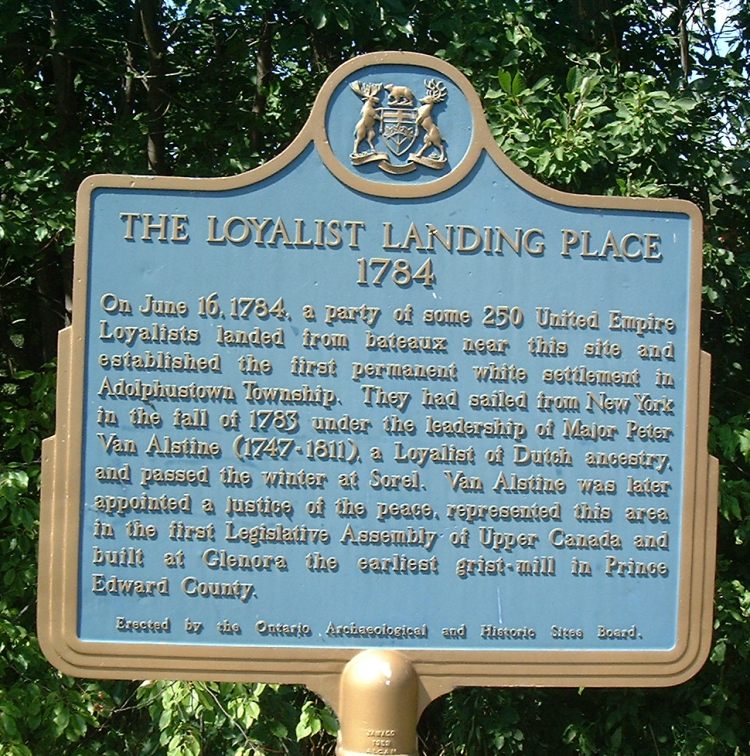 It was unveiled at a ceremony celebrating the 175th anniversary of the landing of the Loyalists at Adolphustown held on June 20th, 1959 in the park. The plaque was unveiled by John D. Van Alstine, a great-great-grandson of Major Peter Van Alstine, accompanied by various municipal, provincial and federal politicians. It is located near the original landing spot and not far from the original UEL burial grounds in the same park.

On June 16, 1784, a party of some 250 United Empire Loyalists landed from bateaux near this site and established the first permanent white settlement in Adolphustown Township. They had sailed from New York in the fall of 1783 under the leadership of Major Peter Van Alstine (1747-1811), a Loyalist of Dutch ancestry, and passed the winter at Sorel. Van Alstine was later appointed a justice of the peace, represented this area in the first Legislative Assembly of Upper Canada and built at Glenora the earliest grist-mill in Prince Edward County.

Erected by the Ontario Archaeological and Historic Sites Board