The white marble marker for Lieutenant Christian Wehr in the Philipsburg Protestant Cemetery on South Street in Philipsburg, Quebec was dedicated on August 28, 1976. 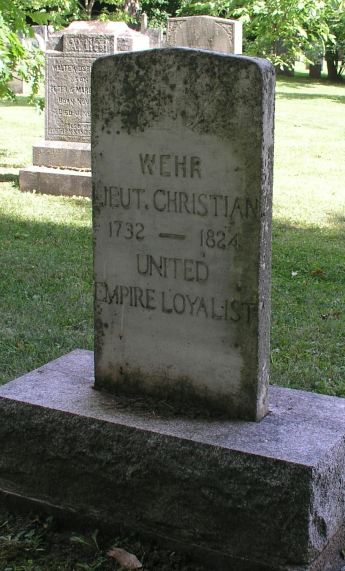 The Sir John Johnson Centennial Branch held a Pilgrimage to the Loyalist cemeteries on August 28, and unveiled a marble marker to Lieutenant Christian Wehr in the Philipsburg Cemetery, in the Eastern Townships.

At a meeting earlier in the year, Arsene Galipeau and Mrs. R. Moore were appointed to choose a marker and to see that it was erected. They chose a small piece of Philipsburg marble with a Stanstead granite base, and it was suitably engraved with the following inscription – “Lieut. Christian Wehr, 1732-1824 – United Empire Loyalist”…

It was erected by the Sir John Johnson branch and great-great-granddaughters Miss Julia Wehr and Mrs. Arsene Galipeau. It was erected in the plot set aside for soldiers, some of whom had been buried there in 1785. A large basket or red, white and blue flowers were placed beside the stone, which was covered with the George III Flag under which Lieut. Wehr had served. The President of the Branch, Mrs. Laurance Fuller, welcomed the guests, and Mr. Charles McCaw, genealogist, read a paper on the life of Lieutenant Wehr, after which marker was unveiled by Lieutenant Wehr’s descendant, Mrs. Madeleine Dussault. The latter acted as proxy for her great-aunt, Miss Wehr, who is 94 years old, and Mrs Galipeau, both of whom were unable to be present. Mrs. Dussault thanked the branch for this tribute paid to her ancestor. The Standard Bearer, Mr. Neil Creller, assisted Mrs. Dussault at the unveiling.

Mr. Paige A. Knight, President of the Missisquoi Historical Society, brought greetings from the society, and congratulated the U.E.L. on the work they were doing to preserve our heritage.

Reverend Canon Selwyn Willis, former Rector of St. James Church in Stanbridge East, gave a very inspiring prayer, and dedicated the marker to the memory of Mr. Wehr, and all the other loyal pioneers who settled the area.

Small white flags with the letters U.E.L. in red and blue were placed on some of the Loyalist graves. Mrs. Fuller placed the first one on the grave of John Ruiter, acting as proxy for Eunice Ruiter Baker of Ottawa. Mr. Ruiter was Thomas Dunn’s Land Agent, born 1740, died 1797 and his brother, Philip, were among the very first settlers in Philipsburg. Hundreds of Deeds were drawn up by Notary Chaboillez at John Ruiters House.

Miss Patricia Chamberlin placed the flag on her ancestor’s grave, John Saxe. He settled on Rock River, where he built a mill, had a store and post office there. Early settlers from this area went to Saxe’s Mills for their mail. Other Loyalists buried there were Ludovic Streit, Conrad Best and Isaac Mann.

The cavalcade proceed to St. Armand Cemetery were many Loyalists are buried. Mrs. Gordon Wade placed a flag on her ancestor’s grave, Garrett Sixby. Mrs. Wade is the sixth generation of this family to live in the lovely old brick house. Mrs. Moore told the gathering of the work done by Mr. Wade and the people of Philipsburg to restore this lovely bit of God’s Acre to its present fine condition, and a hearty clap of hands was given to Mr. Wade who keeps it mowed and well cared for. Mrs. Clifford Rhicard did the honours for her ancestor, John Buckus, who had served in Burgoyne’s Army. Peter Miller, a very early Loyalist at St. Armand, was remembered by Mrs. Joyce Bradfored placing the flag for Mrs. Charles Buchanan, who was not able to attend due to illness. Mr. Miller helped to build the Methodist Church at Philipsburg. His beautiful old stone house stands today as a symbol of the type of work he did. One quaint stone is noted in this cemetery, its only inscription being “Dear Old Grandma”

All joined in singing “O Canada”

The cavalcade then proceeded to the Pigeon Hill cemetery under the guidance of Mr. Clifford Rhicard. There were over 800 monuments in this cemetery Mrs. Frances Harris of Magog, direct descendant of Samuel Embury, placed a flag on his grave. He was the son of Philip Embury. The first Methodist preacher in North America, who built the first Methodist Church in New York City which still is a noted landmark there. Samuel modelled the Philipsburg Church very much like the one his father built in New York. There is a lovely stained glass window in the church erected to his memory. A descendant of his sister, Catherine, Mrs. Phoebe Hyde of Hudson, Que., also placed a flag. Mrs. Hyde is a member of the Heritage Branch- Montreal. George Hauck, ancestor of Treasurer Stuart Hawke, was named. Clifford Rhicard, a Vice President of the Branch, paid tribute to his ancestor, Joseph Reichert, who came here from Brunswick, New York. He was the father of thirteen children. Clifford has his commission for the militia in which he served.

Previous to the cavalcade the members had enjoyed a picnic lunch together in the United Church Hall, Philipsburg. Mrs. Fuller thanked the Cemetery Committee for their cooperation.