The cornerstone for a monument to commemorate the arrival of the Loyalists in the Bay of Quinte area was laid on June 17th, 1924 by Col. William Ponton KC, past grand master of the Masonic Grand Lodge of Canada, attended by the Right Honourable Sir George Foster, who was the keynote speaker that day. W.S. Morden, president of the UEL Association also spoke on the importance of the loyalists to Canada. One of the key people striving to get such a monument built, along with the Grand Lodge who did much of the financing, was W.C.Mikel, descendant of Godlove Mikel UE, who was the mayor of Belleville at the time. The design of the monument was a log cabin on top of a white engraved column. Other notables of the day present at the laying of the cornerstone included W.S. Herrington, KC noted historian from Lennox and Addington, Col.S.S. Lazier, who was the president of the UEL celebrations of 1924, and other major officers of the Grand Lodge for Ontario. School children from the municipality also attended the event. 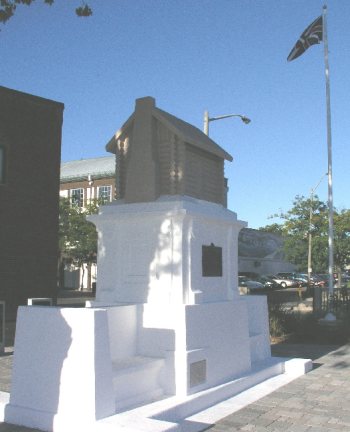 The laying of the cornerstone coincided with a major celebration of the 140th anniversary of the Loyalists arrival in the Bay of Quinte, held June 15th through 19th in 1924. The celebrations included participations from the 48th Highlanders, Princess of Wales Own Regiment, Northumberland Regiment, Prince Edward Regiment, Durham Regiment, Brockville Rifles, Frontenac Regiment, Argyle Light Infantry, and the 34th Battery, plus many student cadet corps and several bands. An invitation to the event had even been hand-delivered to President Calvin Coolidge in Washington by Gwendolyn Lazier, who had travelled the distance from Belleville entirely on horseback.

The completed monument was unveiled with similar pomp and ceremony on September 8th, 1924 by the Lt.Gov of the province, Col. Henry Cockshutt, who served as major speaker of that day, along with Mayor Mikel. The date of Sept. 8th had been chosen as it celebrated the 8th of September in 1783 when seven ships of Loyalists convoyed by the brig HOPE had set sail from New York on their journey to the Bay of Quinte. The monument had been draped in the Union Jack and there were literally thousands of people and school children present for that event, which concluded the 140th anniversary celebrations that year.

In recent years, the monument had started to show major signs of wear, due to its close location to the main street in the city. It was also made more obscure by the newer bridge across Highway #2 constructed in the late 1960s. The monument has recently been refurbished under the auspices of the City of Belleville, and relocated so it is more visible as you cross the bridge. It is a fitting monument to our Loyalist ancestors in the area.

The inscription on the memorial reads as follows:

THIS MEMORIAL
IS ERECTED TO COMMEMORATE
THE 140TH ANNIVERSARY OF THE
LANDING OF THE UNITED EMPIRE
LOYALISTS IN ONTARIO IN THE
YEAR 1784 A.D.
THE CORNER STONE WAS LAID ON
17TH DAY OF JUNE AND THE
MONUMENT WAS UNVEILED ON THE
8TH DAY OF SEPTEMBER 1924 A.D. 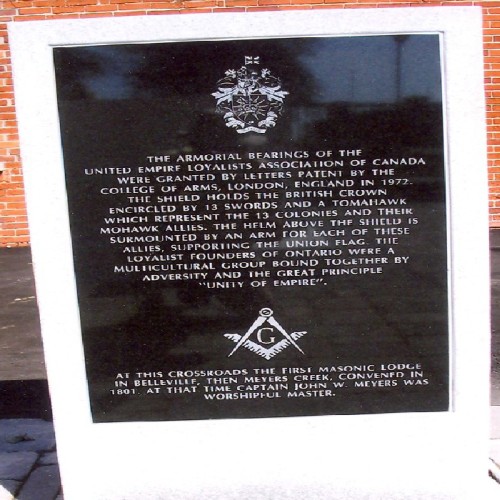 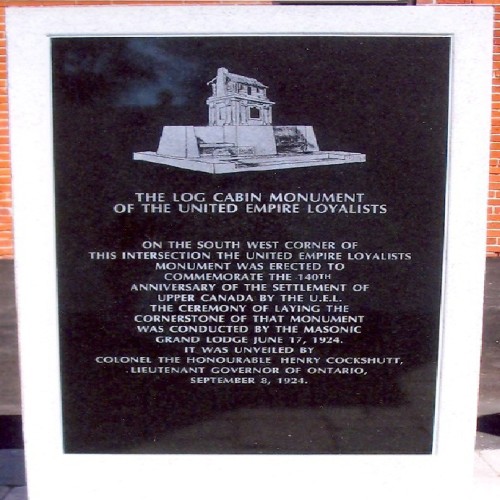 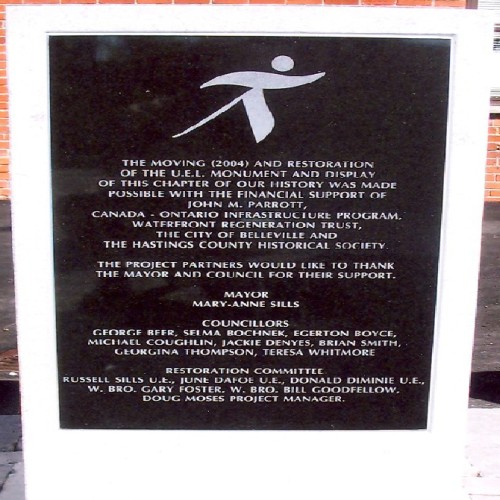 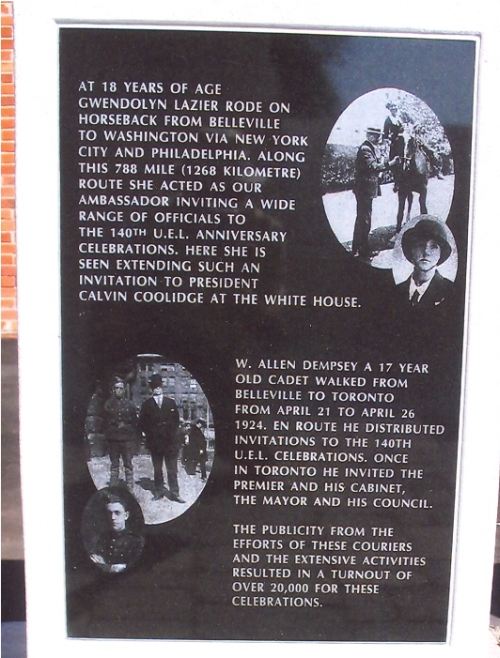 The New-Look United Empire Loyalist monument unveiled
by Luke Hendry, as published in The Intelligencer, September 2005.

It was a voyage to be remembered, but for Gwendolyn Lazier, it was “just fun.”

Officials from all three levels of government and numerous community organizations gathered downtown Saturday morning to unveil the new look of Belleville’s United Empire Loyalist monument. Many references to the city’s history and that of the Loyalists were made, but it was living history that stole the show.

At 100 years old and still up to telling a good story, Lazier was the centre of attention, awe and respect during the unveiling ceremony. There she chatted amiable with dignitaries and friends, revealing bits of her historic travels.

“This is quite a day, isn’t it?” she asked, surveying the northwest corner of Front and Dundas Streets and the refurbished monument.

In addition to the original log cabin structure being reinforced and repainted on a new base, the monument is now surrounded by several more historical plaques including one that tells the story of two remarkable Belleville youngsters.

In 1924, Belleville residents prepared to celebrate the 140th Anniversary of the arrival of the United Empire Loyalists in the Quinte region, Lazier, then 18, and 12 year-old W. Allan Dempsey set out to invite others to the ceremony. Dempsey walked to Toronto, inviting dignitaries from the towns along his route. Lazier did the same, but on a longer, more hazardous path.

Had her mother been alive, Lazier said, she would never have been allowed to go. But her father was dismissive in granting his approval.

“Dad said, ‘Oh, go on. She won’t get any farther than Shannonville anyway.”

Jim Kokesh was an eight-year old at the time, and remembers the day the teens left. “As a kid, I think the biggest thing was the parade,” he said of the departure ceremony at city hall.

Kokesh attended a Thurlow schoolhouse with Jack Parrott, and remembers being on the city’s eastern limit—then around MacDonald Avenue—as Lazier passed.

“She went out Dundas Street,” said Kokesh. “She just sauntered down the highway…She would eventually pass the Parrott farm.”

“I’d never ridden a horse before and I haven’t ridden one since,” said Lazier, who amazed many well-wishers when she revealed she carried a revolver with her.

It may have saved her from trouble: in northern New York Sate, a suspicious group began following her.

“There were four men behind me in a car,” she recalled.

Extending her right index finger and thumb in the shape of a gun, she demonstrated how she brandished the pistol, discouraging the men from bothering her.

Lazier delivered her invitation to President Calvin Coolidge’s White house; through a now-nameless Belleville woman who worked in the residence’s kitchen she was able to tour the building, but remembers little of that part of her adventure.

Her ride for Saturday was bit more stylish; she accepted a stretch limousine ride home courtesy of city hall-but only after teasing Parks and Recreation Director Doug Moses as he offered her the ride. The senior citizen was straight-faced as she looked up at Moses and replied, ” I thought I’d walk.”

Read a three page version of her story: Gwendolen Rides To Washington (Nov. 2007).