Burlington, ON (Jan. 18, 2007) – The Royal Canadian Mint continued its tradition of issuing its Commemorative Silver Dollar as the first collector coin of the year. Honouring Canadian native hero Thayendanegea (Joseph Brant), the 2007 Silver dollar coin was officially unveiled by John Moore, Acting VP, Marketing & Sales, Royal Canadian Mint, today at the Joseph Brant Museum in Burlington, Ontario. Lynda Powless, a sixth-generation descendant of Joseph Brant, was an honoured guest at the ceremony. Burlington is the site of the 3,450 acres granted to Thayendanegea by King George III for his dutiful service to the Crown during the Seven Years War and the American War of Independence. 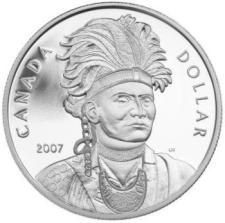 This limited edition coin is struck in sterling silver and was adapted from an original artwork by Laurie McGaw. It features the stately portrait of Joseph Brant wearing a traditional native headdress and a gorget bearing the British Royal Coat of Arms. With a limited mintage of 65,000 it is also available with a proof finish, with a brilliant uncirculated finish and with selected gold plating as part of the Proof Set.

Born in Ohio during a tumultuous era that defined North America, Thayendanegea’s life was greatly influenced by an alliance with the British. Thayendanegea was given the Christian name of Joseph Brant and received an English education.

Brant fought his first battle with the British when he was just a teenager. But this young warrior was also a visionary. Brant clearly understood that Native people faced inevitable change and united various nations to protect their interests.

As war chief of the Six Nations and a British military captain, Brant was respected by both sides. And when the American War of Independence ended (1783), he acted as statesman and negotiated land for the Six Nations people.

They settled in the Grand River Valley (Ontario) where Brant played a key role in their economic, political and religious lives, bringing a school, as well as a saw and grist mill to the community. Yet, despite this seemingly British way of life, Brant’s vision of Native sovereignty persisted. 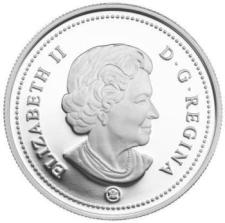 Thayendanegea was equally at ease with a tea cup or a tomahawk. He adopted a new culture without dishonouring his Native roots. Through his voice and his actions, Brant shaped much of Native Canada a truth that echoes throughout southwestern Ontario and in the town that bears his name.

The Joseph Brant Museum was built to commemorate Joseph Brant and his original homestead. At the urging of the Hon. T.B. McQueston, Minister of Highways in Ontario, and with the help of the Imperial Order of the Daughters of the Empire, Thayendenegea Chapter, construction began in 1937, culminating in the official opening of the Museum the public on May 23, 1942.

Over the years, the Museum has added a number of important acquisitions to its collection, including personal artefacts owned and used by Joseph Brant and the Eileen Collard Collection of Historic Costume and Textiles. Committed to the preservation of Burlington’s past and as a touch point for our national history, the Joseph Brant Museum is a place for exploring a wealth of cultural traditions, issues and ideas which inspire within and beyond our borders. For more information on the Museum’s programming, click here for the official web site.

For more information on the Royal Canadian Mint, or its products and services, click here for the official web site.