The Minister of State (Forestry) Gerald Merrithew, on behalf of Environment Minister Suzanne Blais-Grenier, officially opened Parks Canada’s exhibit on the United Empire Loyalists in Saint John, Saturday, May 18, 1985. The exhibit is located at the corner of Union and Germain Streets, next to Loyalist House.

(From the text of the speech)

“The Historic Sites and Monuments Board of Canada has recommended that the United Empire Loyalists’ contributions to Canada are of national historical significance … Saint John was chosen as the area for New Brunswick. The arrival of the Loyalists at the mouth of the Saint John River on May 18, 1783 led to the establishment of Saint John and the creation of the province of New Brunswick in 1784 … on this very day (May 18) 200 years ago, the first Loyalists arrived at a spot not far from where we are standing. This historic event led to the creation of our province and to the establishment of our city. More than fourteen thousand United Empire Loyalists settled in what is now New Brunswick. Their vision, their faith, and their hard work had a powerful impact. New Brunswickers and all Canadians owe the Loyalists a great deal.

This new Parks Canada exhibit commemorates our Loyalist ancestors and their important contribution to Canadian history.

Today’s commemoration is an excellent example of how people can work together to preserve our past for future generations.

Heritage preservation would not be possible without the cooperation and hard work of many individuals, organizations and governments…”

The exhibit consists of a three-metre tall sculpture of the Union Jack, supported by seven panels describing the history of the Loyalists. It is located in a small park, on property leased to Parks Canada, free of charge, by Trizec.

The ceremony opened with introductory remarks by Dr. Jean Daigle, New Brunswick representative on the Historic Sites and Monuments Board of Canada and included remarks from the Hon. G,. S, Merrithew for Ministry of the Environment, The Mayor of Saint John[Elsie Wayne UE], representatives of the United Empire Loyalists and the provincial government. Mr. Barton Claus of Delancey’s Brigade read the proclamation and the Reverend Christopher Pratt of Trinity Anglican Church offered the prayer of dedication. To conclude the ceremony Delancey’s Brigade rendered fife and drum selections. 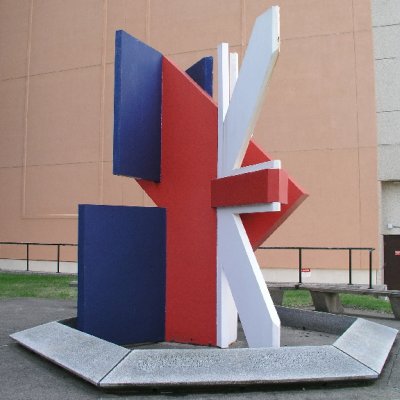 Text of the Six Panels

1. Determined to remain British subjects, more than 14,000 Loyalists settled in New Brunswick after the American Revolution. Their courage and hard work have made a lasting contribution to Canada.

2. The harassment suffered by the Loyalists during the Revolution made them suspicious of political change. Cherishing the monarchy as a symbol of Imperial unity, they upheld British parliamentary traditions.

3. In 1784, the colony of New Brunswick was created in response to the Loyalists’ request for a government separate from Nova Scotia. Fredericton was named the capital in 1785.

5. Loyalist families overcame many difficulties as they developed prosperous farms in the fertile soil of the river valleys and contributed to New Brunswick’s agricultural growth.