Loyalist Lane is located in the Fanshawe Pioneer Village, 2609 Fanshawe Park Rd. E. in London, Ontario (see PDF map of the village). Loyalist Lane extends south from the fire hall along both sides of the road and ends almost in front of the Paul Peel house on the west side of the village by Trinity Anglican Church. Members of the London and Western Ontario Branch donated $100.00 each to provide the trees and place a large boulder with the names of Loyalist ancestors and donors near the lane. Some were donated to honour a relative living at that time.

The Upper Thames River Conservation Authority planted approximately fifty trees of the species found in the Carolinian forest which in Canada is located only in an area south of a line drawn from Grand Bend to the western edge of Toronto.

In June 1999, the London and Western Ontario Branch celebrated Loyalists’ Weekend at Fanshawe Pioneer Village. On the 19th, a flagpole donated by Joyce Polgrain UE and her husband Bert Polgrain was dedicated and the Loyalist flag raised. The flagpole is located near the corner of Talbot and Main in front of the historic Trinity Anglican Church. The branch makes an annual donation to ensure the maintenance of a bed of red geraniums at the base of the flagpole.

On the 20th, following a Loyalist church service conducted by Branch Chaplain Rev. Robert Carson, Loyalist Lane and the memorial boulder were dedicated. 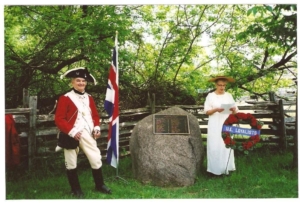 This lane of Carolinian trees is dedicated to the memory of the early settlers
of Ontario, many of whom were United Empire Loyalists.