Stanley Mills commissioned the first UEL plates in 1932 from the Herbert S. Mills China Store. At the time, Stanley Mills was president of the Hamilton Branch of the UELAC and he paid for the plates himself. Each plated cost $7.00, a small ransom at a time when the standard wage for female clerks in Hamilton was $7.00 a week. Male clerks fared rather better: they got $16.00 a week. Originally, 600 plates were made and given to members of the Hamilton Branch of the UELAC. There were about 100 members plus a junior membership of about 40 at that time. 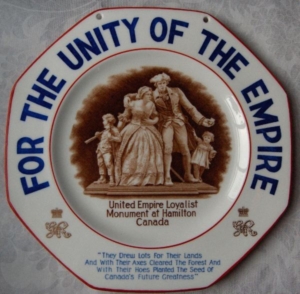 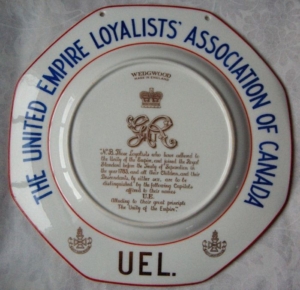 The plates were made of bone china and were highly distinctive due to their octagonal shape and the presence of two small holes in the upper edge. These holes were made so that the plates could be easily hung on the wall without using plated hangers which would have obscured, and also perhaps scratched, the elaborate design on the back of the plates. The front of the plate has a thick red line around the outside edge and a thinner line on the inner rise. Most prominent around the upper rim in blue capital letters is the phrase ” For the Unity of the Empire.” On either side of this phrase, also on the rim, and in gold leaf, was the cipher of King George II with a crown above it.

In the centre of the plate is a sepia image of the Hamilton United Empire Loyalist Monument depicting a “typical” UEL family: a small boy, a woman, a man and a little girl. The original bronze monument, which still stands in Prince’s Square was commissioned by Stanley Mills in 1929 and created by Sidney March of the same family of sculptors who designed the National war Memorial in Ottawa. On the bottom of the rim in blue letters are these words from the monument: ” They Drew Lots for Their Lands And With Their Axes Cleared the Forest And With Their Hoes Planted the Seed of Canada’s Future Greatness.”

The back of the plate is both elegant and distinctive. Around the upper rim printed in blue, are the words “THE UNITED EMPIRE LOYALISTS’ ASSOCIATION OF CANADA'”. The rest of the printing is in gold leaf. The initials UEL are printed on the bottom rim bordered on both sides by the motto ” ducit amor patriae” roughly translated as “love of Country” In the centre of the plate is a gold crown with gold letters GR overlaid with a III ( for George Rex III) underneath. Below that in gold is the following:

N.B.: Those Loyalists who have adhered to the Unity of the Empire and joined the Royal Standard before the Treaty of separation in the year 1783 and all their Children and their Descendants by either sex are to be distinguished by the following Capitals affixed to their names U.E. alluding to their great principal, the Unity of the Empire.

Also on the back of the plate are the words “Wedgwood” and “made in England.” The country of designation was required by the Canadian government after 1917 so any English china you see without “made in England”, or just “England”, predates this period.

Not surprisingly, when the plates were first available, everyone wanted one. As the members of the UELAC increased, many of them wanted plates for their children. Very soon the original supply of plates was exhausted and it became apparent that a second issue of the, by now highly prized, plates, would be necessary. Around 1937, a second issue of some 300 plates was made; these were exact replicas of the first series. At this time, it was decided that any future issues would have to be done on semi-porcelain which was less expensive than bone china. To the best of my knowledge there are none of the original bone china plates in circulation now, although I did see one at auction some ten years ago. Presumably all the families who originally received them have hung onto them so there is no easy way to ascertain their value. I can say that a plate like this could not be reproduced today for less than $150.00 to $200.00. 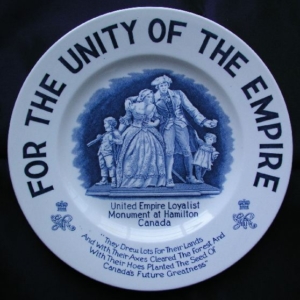 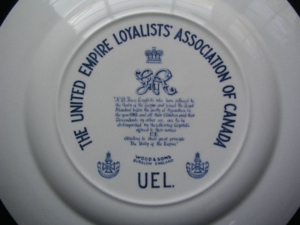 In the late 1960’s, Mr. Jack Aikman, who was then president of the Hamilton branch UELAC, approached me about getting new plates. At this time, I was owner of H.S. Mills China Store, the firm previously owned by my father and grandfather. I went to England and visited several companies to solicit bids to make the new plates selecting Woods & Sons who eventually produced three series of plates. These new plates were semi-porcelain and round in shape, rather than octagonal, to reduce the cost and without the holes.

The front of the plates bore the same words and image as the original bone china plates but the lettering and the image were in brown. In later issues, the plates were all over blue, or green, as well as brown. The back of these plates bore the same inscription as the original plates, except Wood & Sons replace Wedgwood. When the store closed in 1983, some 37 of these plates remained. To ensure their safekeeping, these plates were to be taken to the home of the Branch President after which I lost track of them. 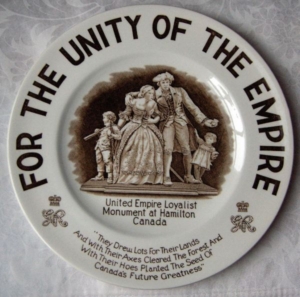 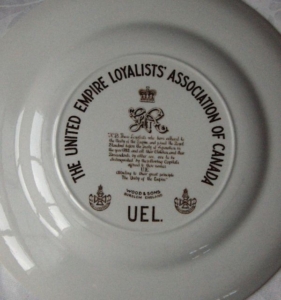 As was the case for the original plates, it is difficult to put a monetary value on the later series of plates. Their real value is that they are a permanent reminder of our heritage and our ancestors who played an integral part in the founding of Canada.