On 11 September 1927 a monument honouring the United Empire Loyalist settlers of the original Lac Maskinongé settlement was dedicated in the English Cemetery of the Parish of St. Gabriel-de-Brandon, Quebec. The monument consisted of a large, rough rock to which was attached a bronze plaque listing the names of the Loyalist settlers. 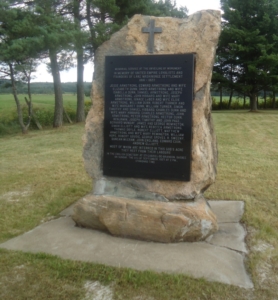 While the town is about 100 km northeast of Montreal, in the Lanaudiere region of Quebec, on the shores of a large inland lake, called Lac Maskinongé, the location of the cemetery is a few kilometers outside of town on a rural road called the Rang Saint-David, on the east side of the lake. 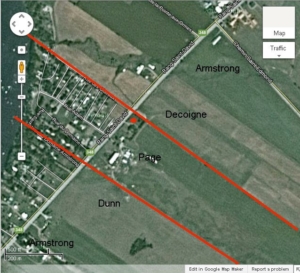 Location of the cemetery — aerial view (Click to enlarge)

A transcription of the plaque has been provided from the order of service: 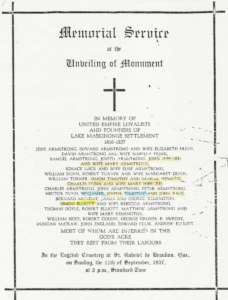 MOST OF WHOM ARE INTERRED IN THIS GOD’S ACRE THEY REST FROM THEIR LABOURS.

These Loyalists seem to have settled first on the north shore of the St. Lawrence River, around Louiseville. But they appear to have moved north and to have taken up land on the east shore of Lac Maskinongé, establishing what was called the Lake Maskinongé Settlement, in the last years of the 18th century or the early years of the 19th.

In 1842, one Benjamin Page had some of his land surveyed for the establishment of school, church and cemetery, where many of the Loyalist families and their immediate descendants were buried. In 1849, a sum of 7 pounds, 10 shillings was paid for the land. In 1850, the Anglican Bishop of Montreal was petitioned to consecrate the land. The reference to John Page in the documents below is to Benjamin’s son. The school and church are long gone.

Roger Chattell of Pennsylvania and a descendant of Benjamin Page, has provided (PDF) transcriptions of Land Survey: A portion of Benjamin Page’s land with the parish’s intended church/school (July 1, 1842; St-Gabriel-de-Brandon, Quebec); Receipt of payment from church to John P. Page for donated land for church (December 28, 1849; Berthier, Quebec); and Petition for consecration of Benjamin Page’s gift of cemetary land (circa 1850; St-Gabriel-de-Brandon, Quebec). In addition, he has provided a copy of an 1844 map showing the properties belonging to many of the names mentioned.

In August 2012, the monument was vandalized and the bronze plaque stolen: 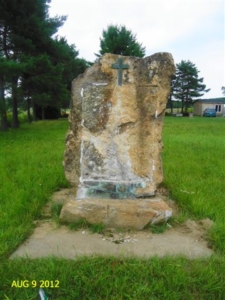 In 2013, the municipal council of the Municipalité de la Paroisse de Saint-Gabriel-de-Brandon (the rural Municipality of the Parish of Saint-Gabriel-de-Brandon) awarded a contract to a firm called Bernard Longpré Inc. to engrave a new plaque, in black granite, which will bear the same (English-language) inscription of 1927 and the names of the Loyalists concerned, and to install that replacement plaque on the rock that constitutes the monument. While the new plaque has been installed, a service of rededication has yet to be scheduled for 2014.

The United Empire Loyalists’ Association of Canada greatly appreciates the dedication of Madame Jeanne Pelland, Secretary-Treasurer of the Municipality of the Parish of SGdeB, Roger Chatell, descendant of Benjamin Page and Robert Wilkins, President of the Heritage Branch UELAC to the restoration of this monument to Canada’s early history. The Municipality of the Parish of SGdeB also appreciated the donation to the restoration by the Heritage Branch UELAC. 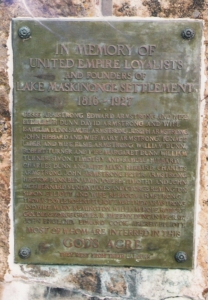 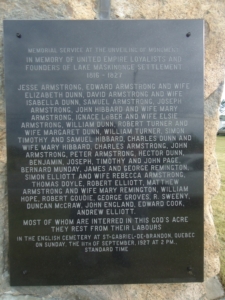