The Loyalist Memorial Church plaque is located on the north side of the Loyalist Parkway ( Old Highway # 33) east of the UEL Heritage Centre and Park in Adolphustown, Ontario and near what is also known as the St. Alban the Martyr UEL Memorial Church. It was unveiled on September 11, 1960 by Ontario Lt. Gov. Keiller MacKay, along with other local dignitaries. 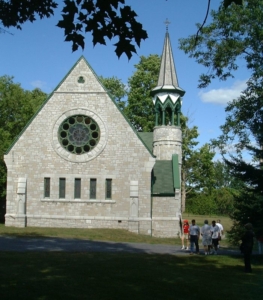 It was unveiled at a ceremony celebrating the 175th anniversary of the landing of the Loyalists at Adolphustown held on June 20th, 1959 in the park. The plaque was unveiled by John D. Van Alstine, a great-great-grandson of Major Peter Van Alstine, accompanied by various municipal, provincial and federal politicians. It is located near the original landing spot and not far from the original UEL burial grounds in the same park. 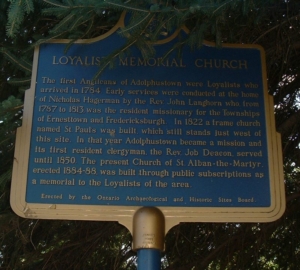 The first Anglicans of Adolphustown were Loyalists who arrived in 1784. Early services were conducted at the home of Nicholas Hagerman by the Rev. John Langhorn who, from 1787 to 1813, was the resident missionary for the Townships of Ernesttown and Fredericksburgh. In 1822 a frame church named St. Paul’s was built, which still stands just west of this site. In that year Adolphustown became a mission, and its first resident clergyman, the Rev. Job Deacon, served until 1850. The present church of St. Alban-the-Martyr, erected 1884-88, was built through public subscriptions as a memorial to the Loyalists of the area.

Erected by the Ontario Archaeological and Historic Sites Board 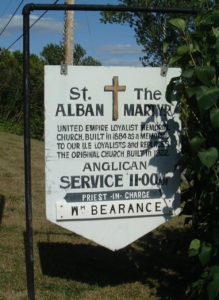