In honour of the 150th anniversary of the arrival of the United Empire Loyalists in the Niagara District members of the United Empire Loyalists Association of St. Catharines and District decided to erect a permanent memorial. They received permission from the Niagara Parks Commission to move the boulder that marked the halfway point between Niagara-on-the-Lake and Queenston to Memorial Park in downtown St. Catharines. The park is located on St. Paul St. W. at the corner of Yates St. This boulder measures 6 x 6 x 3 feet high. Two bronze plaques were cast and attached by Mr. Fyffe. The memorial was unveiled on 27 December 1934 by two young Loyalist descendants, Margaret Gander, the 8 year-old granddaughter of Branch President Fred. R. Parnell (Margaret Gander Hunter is a loyal member of Colonel John Butler Branch) and Marjorie Sanderson, granddaughter of the Branch Vice President C.A. Hesson. 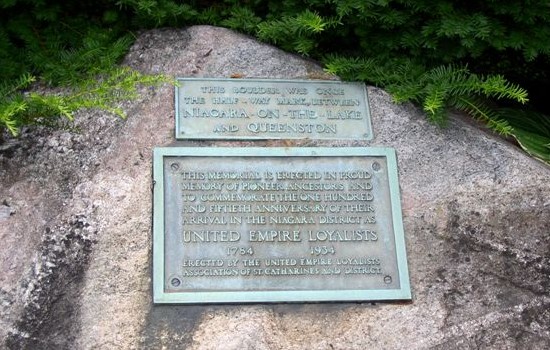 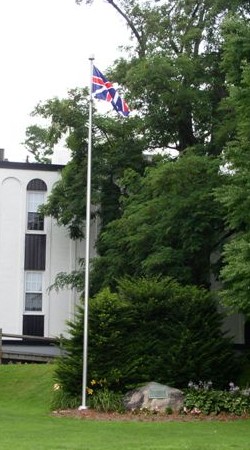 The inscription of the top plaque is as follows:

The inscription of the bottom plaque is as follows:

Submitted by Bev and Rod Craig