In 1965, a cairn dedicated to three Loyalist settlers in the Middleton area of Nova Scotia was erected in the park in front of the Macdonald Consolidated School. While the name of the park has changed from Middleton Park to Canada 125 Park, and has been known as Centennial Park since 2009, the school is now the Annapolis Valley Macdonald Museum. 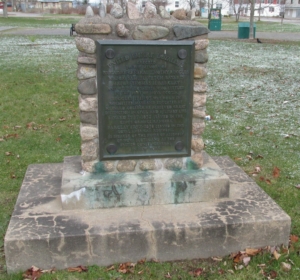 A ceremony, unique in the history of this area of the Annapolis Valley, took place on Wednesday, June 3rd [1965] at the Middleton Park when a cairn with plaque in memory of three prominent Loyalists, was unveiled by Mayor F. W. Smith. The beautifully proportioned cairn, built of native field stone, was donated by the Middleton and District Board of Trade, with the burnished copper plaque supplied by The Historical Sites Commission of Nova Scotia, the only commission of its kind in Canada.

Following the Invocation, given by Rev. K., L. Thompson, Minister of Middleton United Baptist Church, Mrs. H. G. Goucher, Chairman of the Park Commission, briefly reviewed the development of the park which has added greatly to the beauty of the town and has attracted many favourable comments from visitors.

Dr. R.S. Longley, former Vice-President of Acadia University, gave the address preceding the unveiling. An acknowledged authority on the early history of Nova Scotia, he paid particular tribute to those outstanding Loyalists named on the plaque. In particular, he referred to the patriotism, scholastic training and military leadership of Brigadier-General Ruggles, the brilliant legal mind of Major Barclay and, in his later years, the evangelistic zeal of Major Bayard.

Dr. Will R. Bird, Chairman of the Historic Sites Commission, in his brief remarks, paid tribute to the late Murray Elliott, of Melvern Square, whose research and deep interest in these early settlers provided the impetus to the erection of this fine memorial.

The band of Middleton RCAF Air Cadet Squadron No. 5117, under the direction of M. W. Harvey, provided the music previous to and during the ceremony. 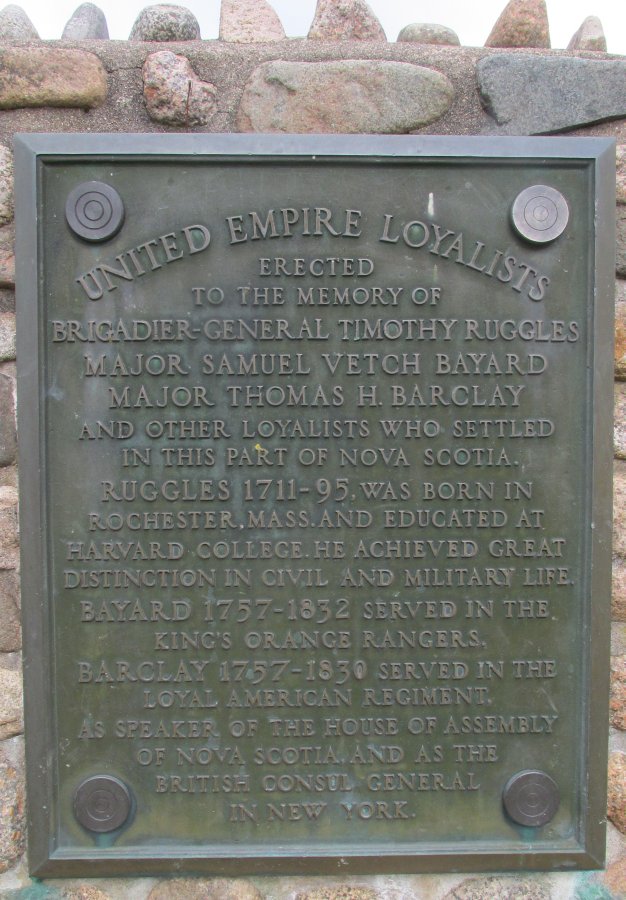 ERECTED TO THE MEMORY OF BRIGADIER GENERAL TIMOTHY RUGGLES, MAJOR SAMUEL VETCH, BAYARD MAJOR THOMAS H. BARCLAY AND OTHER LOYALISTS WHO SETTLED IN THIS PART OF NOVA SCOTIA.

RUGGLES, 1711-95, WAS BORN IN ROCHESTER, MASS. AND EDUCATED AT HARVARD COLLEGE. HE ACHIEVED GREAT DISTINCTION IN CIVIL AND MILITARY LIFE. BAYARD 1757-1832 SERVED IN THE KING’S ORANGE RANGERS.

BARCLAY, 1757-1830, SERVED IN THE LOYAL AMERICAN REGIMENT, AS SPEAKER OF THE HOUSE OF ASSEMBLY OF NOVA SCOTIA AND AS THE BRITISH CONSUL GENERAL IN NEW YORK. 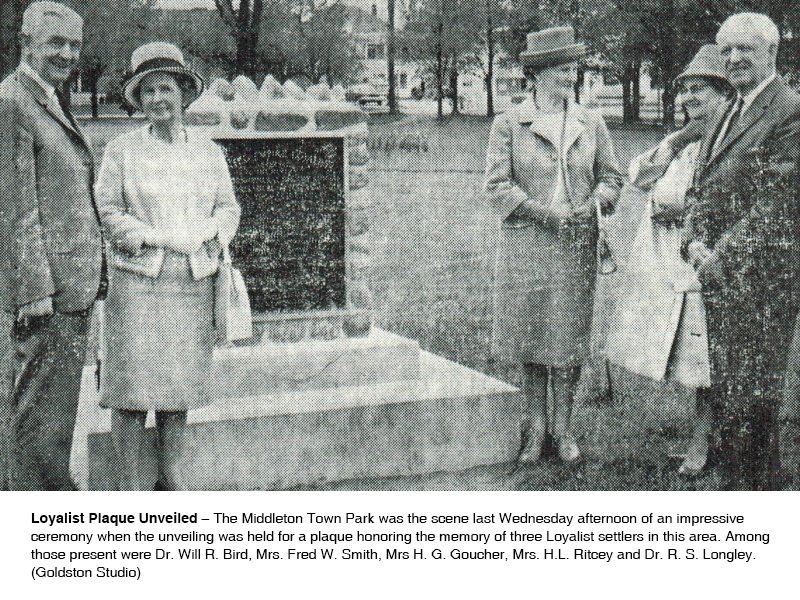