The Queen Elizabeth II equestrian statue, located between the Center Block and the East Block buildings on the grounds of Parliament Hill, is not necessarily a tribute to the United Empire Loyalists. It is included in the Monuments folder in recognition of both the work of UELAC members and our support of constitutional monarchy.

Unveiled by Her Majesty Queen Elizabeth II in 1992, the sculpture was created by Jack Harman of British Columbia (1927-2001) in recognition of the 40th year of her reign and as part of Canada’s 125th anniversary celebrations. The queen is portrayed riding astride rather than the traditional side saddle on the first equestrian statue of the Queen in the world; the horse, Centenial, was given to the Queen by the RCMP in 1977 to celebrate her 25th year as monarch. (A maquette has been acquired by the House of Commons Heritage Collection as part of the Queen Elizabeth Diamond Jubilee 2012.)

Going Coastal has published a full profile on the sculptor, who was awarded the Order of British Columbia in 1996. Jack Harman also sculpted the bronze figures on the Peacekeeping Monument “Reconciliation” in Ottawa, which is no. 38 on the National Capital Commission’s StreetSmART Walking Tour of Public Art (3.52MB PDF) exploring monuments and sculptures throughout Ottawa. The Queen Elizabeth II equestrian statue is no. 6 on the same tour. 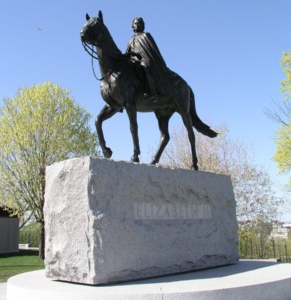 The Queen on Parliament Hill

At high noon on Tuesday, June 30th and in brilliant sunshine, several of us, including The Hon. John Matheson, Frank Cooper with wife Evelyn, other members of Sir Guy Carleton Branch, Okill Stuart and Bill Smy, were among the thousands who gathered in front of the Parliament Buildings and on a knoll near the East Block, for the ceremony of Queen Elizabeth II unveiling her equestrian statue. There she was greeted by the Prime Minister and Mila Mulroney, who walked slowly with her to the podium to greet the Right Hon. Raymond J. Hnatyshyn, The Hon. Elmer McKay, Dr. John Cole and others.

As the Queen unveiled the statue and the blue shroud slipped away, the crowd gasped at the bronze statue’s stately beauty. It was created by Jack Harmon, well-known Canadian sculptor and artist of Roberts Creek, BC. He has depicted Her Majesty on Centenial, a Royal Canadian Mounted Police horse presented to her during the Force’s Centennial in 1973. The statue stands on a plinth of Canadian granite quarried in the Laurentians and on a site facing the Centennial Flame. It marks both her 40th year as a Canada’s Monarch and Canada’s 125th year as a Nation. This is a significant milestone in the relationship between the Monarchy and Canada, in that Queen Elizabeth II will have reigned longer than any other sovereign since Confederation in 1867.

Later on in the afternoon in a happy ceremony at Rideau Hall, Her Majesty, as colonel-in-chief of the Canadian Grenadier Guards, the oldest regiment in Canada, presented new colours-flags and drums. Among the invited guests to the unveiling was Lieutenant-Colonel William A Smy, U.E., who suggested the idea of an equestrian statue while working at National Defence Headquarters. Interviewed that afternoon by the Globe and Mail, Bill told the story of walking on Parliament Hill in the late fall of 1986 with a friend who asked why there was a statue of Queen Victoria but none of the present Queen.

Parliament Hill includes three main buildings: the Centre Block which houses the Commons, The Senate and the office of the Prime Minister and the East and West Blocks containing the offices of members of Parliament committee rooms and administrative space. The library with its many majestic spires and flying buttresses, is sited behind the Centre Block. Standing regal on a knoll between the Centre and West Blocks is the statue of Queen Victoria, ceremoniously unveiled in 1901 by the late King George V, as part of the Royal Tour of that year. The statue represents Victoria in full regalia and with a lion reposing at her feet, all reflecting the concept of the monarch as Queen and Empress of the British Empire at its zenith. The statue of Queen Elizabeth II now joins that of Queen Victoria, her great-great grandmother. There are several other statues on the Hill commemorating former Prime Ministers, Fathers of Confederation and Harry Harper, a young colleague and friend of William Lyon Mackenzie King, who died heroically in 1901 trying to save a young woman from drowning.

Sparked by his friend’s remark, Bill initiated the statue project early in 1987. He wrote over 2500 letters across Canada to individuals, numerous organizations including our own United Empire Loyalists’ Association, numerous politicians on all levels of government, eliciting their support and urging them to lobby all MPs. His own member of parliament, Bill Tupper, then representing Nepean-Carleton, suc-cessfully ushered a Private Members Bill through the House of Commons on March 22, 1988, to gain the approval needed to erect the statue on Parliament Hill. He was appointed chairman of a committee to implement the project. It is interesting to note that the motion on March 22 was carried unanimously through both the House and the Senate.

Bill Tupper was not returned in the 1988 election, thus a Statue Committee, including MPs and others, was formed under the direction of Dr. John Cole, MP from York-Simcoe. Bill Smy worked closely with one member, George Rolfe, FRSA, on design details and specifications throughout the project.

Bill Smy is well known to many members of our Association but few know his background. Included in the New Year’s honours list of January, 1989, was the appointment by Her Excellency, Governor General Jeanne Sauve, of William Arthur Smy, to the Order of Military Merit in rank of Officer. Bill joined the Lincoln and Welland Regiment in 1957, rose to the rank of Lieutenant Colonel and commanded the unit in 1979-1983. A native of Port Colborne, Ontario, he attended Hamilton Teachers’ College and Brock University before teaching history at Ridley College in St. Catharines. Prior to moving to Victoria, where he now resides, Bill served for several years as a staff officer at National Defence Headquarters in Ottawa.

The Order of Military Merit, established by the Queen in 1972, recognizes conspicuous merit. Appointments in the rank of officer are made for outstanding meritorious service in duties of responsibility. Bill Smy is probably best remembered as a member of Dominion Council and for his involvement with Okill Stuart in the planning for the visit of His Royal Highness, The Prince Philip, Duke of Edinburgh, to our 1989 Convention. He traces his Loyalist ancestry through his mother’s family, the Dunhams, who settled along the Lake Erie shore near Port Colbourne, before the turn of the eighteenth century.