The Loyalists in Upper Canada, a memorial plaque was unveiled 27 May 1967 by E. John Chard, Dominion President. This marker was one of a series being erected throughout the province by the Department of Public Records and Archives, acting on the advice of the Archaeological and Historic Sites Board of Ontario.

“Following registration [for the National Centennial Convention held in Toronto, May 27-28] and a buffet luncheon at the Toronto Branch Headquarters on Prince Arthur Avenue, where there was a fine getting-together and renewing of acquaintances, members proceeded to the Ontario Parliament Buildings to witness one of the main events of our National Convention – the unveiling of the plaque to “The Loyalists in Upper Canada.'”

Speakers at the dedication included John G. Richardson of Lindsay, a member of the Governor Simcoe Branch; former Premier of Ontario and honourary vice-president, Hon. Leslie M. Frost; and Prof. J.M.S. Careless, co-chairman of the Archaeological and Historic Sites Board. 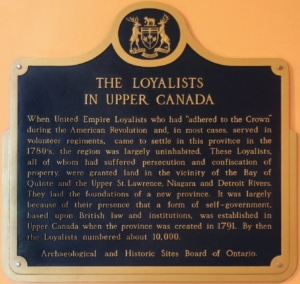 Inscription of the memorial:

The Loyalists in Upper Canada

When the United Empire Loyalists who had “adhered to the Crown”
during the American Revolution and, in most cases, served in
volunteer regiments, came to settle in this province in the
1780s, the region was largely uninhabited. These Loyalists,
all of whom had suffered persecution and confiscation of
property, were granted land in the vicinity of the Bay of
Quinte and the Upper St. Lawrence, Niagara and Detroit Rivers.
They laid the foundation of a new province. It was largely
because of their presence that a form of self-government
based on British law and institutions, was established in
Upper Canada when the province was created in 1791. By then
the Loyalists numbered about 10,000

Archaeological and Historic Sites Board of Ontario.