The Cairn was built by the Regina Branch UELAC to honour the Saskatchewan pioneers of Loyalist descent who had come to settle in what was to become the Province of Saskatchewan. The year 2005 being the Centennial of Province was an ideal time to make the UELAC more visible in Saskatchewan. 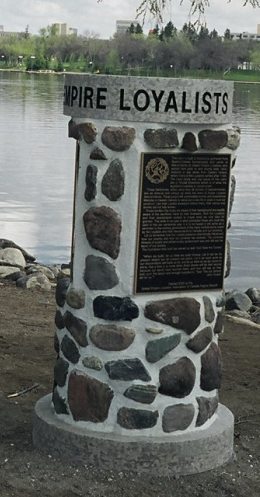 The Cairn is cylindrical to suggest renewal/rebirth and soul/spirit. It is constructed of field stone with Tyndall stone rounds top and bottom and stands five foot six tall, two foot six in diameter. At present it has two plaques, eighteen by twenty four inches, which give a short history of United Empire Loyalists’, the Armorial Bearings, and the cypher. A third plaque will be mounted in 2014, when the Association celebrates its centennial.

The Regina Branch members, on their own initiative, raised the finances for this project. These dominion wide donations came from interested individuals as well as a number of UELAC branches. Funds were also received from the Memorial Fund Committee through Dominion office and the 2014 Promotions Project. Stones were collected from land in Saskatchewan known to have Loyalist connection. Many of these stones came from the actual homesteads of the Loyalist descendants. One stone came from Ontario and was strategically placed at the base of the column of stone between the two plaques. Construction started October 5, 2004, the time capsule was placed October 14th and on October 26, 2004 the final capstone was placed which reads “United Empire Loyalist”. The plaque was ordered on February 4, 2005 and a final blitz for funding was initiated. The plaques were installed on April 28, 2005.

Our gracious patron, the Lieutenant Governor, Dr. Lynda Haverstock, unveiled the cairn on June 2, 2005 during the annual UELAC conference held in Regina. The cairn, as had been the site a year prior, was dedicated by Dereck Nicholls, a retired Anglican minister and chairman of the Monarchist League, South Saskatchewan Branch. The cairn stands on the Provincial Legislative grounds to the northeast of the Legislative Buildings, along the shore of Wascana Lake. A well used walking/riding path runs right beside it.

Wording for the third plaque will be finalized and the plaque ready for placement in 2014.

The inscription of the first plaque reads as follows:

The American Revolution split the population of the Thirteen Colonies into two main groups – the Patriots and the Loyalists. The Treaty of Separation of 1783 ended the eight years of civil war. A third of the colonists were granted no rights in the new country, the United States of America. They were forced from their homes and resettled in British held territory to the north. Those that travelled overland were settled around Niagara or along the St. Lawrence River towards Lake Ontario. Those that were evacuated from the City of New York relocated in Quebec and in the Maritime Provinces. They were of British, French, German, Dutch, Jewish, Mohawk and Black Loyalist background. They came from all walks of life. All had a firm belief in parliamentary rule of law and a strong attachment to the monarchy.

Many Loyalists and their sons were involved in the fur trade with the Hudson’s Bay Company and the North West Company. Explorers such as Simon Fraser and Sir Alexander MacKenzie were sons of Loyalists.

The Loyalists and their sons and daughters rallied to defend their new homeland during the War of 1812. Their descendants have served, often with distinction, in subsequent World Wars. Loyalist descendants joined the North West Mounted Police and later the Royal Canadian Mounted Police to bring law and order to the Territories and Western Provinces.

Their descendants were among the first to settle in what became the province of Saskatchewan. Most filed on homesteads. Others used their talents and skills in the villages and cities that grew to serve their communities. In 1932, the Saskatchewan Branch was organized in Regina. The present branch was founded in 1984.

Today, one in six Canadians can trace to a Loyalist ancestor.

The inscription of the second plaque reads as follows:

This cairn is built of fieldstone gathered from Saskatchewan homesteads and yards of descendants of United Empire Loyalists who settled here prior to and shortly after 1905. Included is one stone from Eastern Ontario where many of the Loyalists settled after 1783. The base stone and cap-stone of this cairn are of Tyndall limestone which is what the legislative building is constructed of.

These fieldstones, which came from all corners of Saskatchewan, are as diverse and unique as were the lives of those Loyalist descendants. Those people left comfortable homes and established lifestyles in Eastern Canada to carve out a new life in what is now our province. Like their Loyalist ancestors before them, their names and stories are not fully known.

Those families that today are aware of their background are equally aware of the sacrifices made by their forebears. Both the Loyalists and their descendants worked to create what we now take for granted. This pride in our past is what prompted those who built this cairn in this our centennial year. It is to be hoped it will serve as a reminder to the coming generations of the many contributions made by the Loyalists and their descendants to Canada and our province.

Let us remember how the Loyalist presence dramatically influenced how our country and our province evolved. The common threads of loyalty and parliamentary government were and still are the fabric of our society.

The foundation they built has served us well. God save the Queen!

“When we build, let us think we build forever. Let it not be for present delight nor for present use alone. Let it be such work as our descendants will thank us for; and let us think as we lay stone on stone, that a time is to come when those stones will be held sacred because our hands have touched them, and men will say, as they look upon the labour and wrought substance, ‘See! This our fathers did for us!'” — John Ruskin

History of the UELAC in Saskatchewan

2014, being the Centennial of the creation of the United Empire Loyalists’ Association of Canada, meant a re-examination of the Association’s purpose and principles. The result was renewed interest and pride by those Canadians who trace their ancestry to that group, who by choosing not to rebel against Great Britain, impacted how Canada evolved.

The stories the Loyalists related about events prior to and immediately after 1783 were all but lost as they struggled to rebuild their shattered lives in what was then Quebec and Nova Scotia. Groups of Loyalist descendants recognized the impact their ancestor’s arrival had on what remained of British North America.

In 1884, Centennial celebrations of the Loyalists’ arrival were held in the Maritimes and Ontario. The United Empire Loyalists’ Association of Ontario was incorporated in 1887. The Toronto Branch was formed in May 1896.

On 27 May 1914, the Parliament of Ottawa approved an act to create the United Empire Loyalists’ Association of Canada. In June 1932, the Saskatchewan Branch was the first Branch west of Toronto to receive a Charter. The Branch became inactive during the Nineteen Forties through the Nineteen Seventies. Renewed interest in creating a Branch in the 1980s led to the Regina Branch receiving its Charter on 2 June 1984.

During and following the building of this cairn and its unveiling in 2005, there was increased awareness that our Branch membership was province wide. Members felt that a change in name would be more inclusive. A request was made to the United Empire Loyalists’ Association of Canada – Dominion Office and a new Charter was granted 19 June 2010, changing the name from Regina Branch to the Saskatchewan Branch. 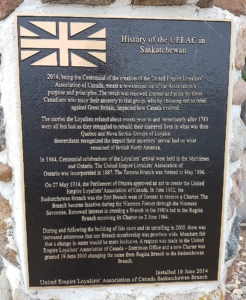