A commemorative stone dedicated to Rudoph Huffman UE and his family, early settlers in Essex County. 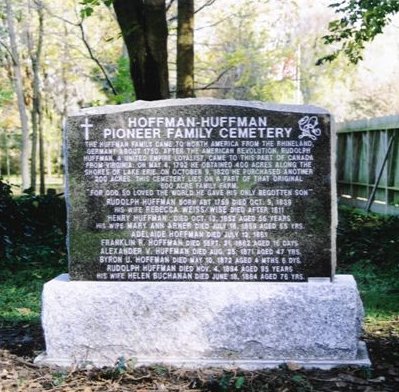 The stone bears the following inscription:

Rudolph Huffman 2nd, was born c 1759 at Frederick, Maryland. He and his wife Rebecca Weiss (Wise) raised seven children. Rudolph’s name appears on the list of grantees in the District of Hesse as receiving lot 86 in the New Settlement 4 May 1792.

The Third Report of the Bureau of Archives for the Province of Ontario 1905, p. 151 shows R. Huffman as a U.E. Loyalist who came in “since the Peace.”