Loyalist Burial Ground in Saint John, New Brunswick, was established on this site shortly after the landing of the United Empire Loyalists in 1783. After its closure as a cemetery in 1848 the site became a memorial garden with tree lined walkways and flower beds.

In 1994 the Irving family undertook a restoration program as a gift to the people of Saint John. They commissioned and carried out a refurbishing of the entire site, including the construction of brick and granite walkways, benches, specially cast memorial gates, railings and light columns. Hundreds of trees and thousands of flowers and shrubs were planted and the magnificent Beaver Fountain was created. 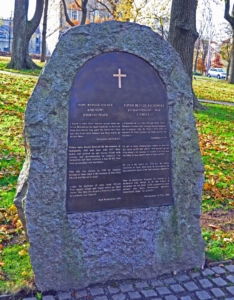 In 2019 Brian McConnell created a short video (below) especially for descendants of those who settled in this region of Canada.

Near the Sydney Street entrance stands the plaque dedicated following the 1995 restoration. The inscription reads as follows:

I heard a voice from heaven, saying unto me. Write,
Blessed are the dead which die in the Lord from henceforth;
Yea, saith the Spirit, that they may rest from their labours,
and their works do follow them.
Revelation 14:13, KJ V

Within these Burial Grounds lie the remains of
immigrants, rich and poor, who left their
homes and arrived on our shores filled with
courage and determination to establish for themselves
and their children a way of life free from
persecution and hostilities.

This site was chosen in 1783 by Loyalist
Settlers of Saint John as the location of their first
Church and Burial Ground.

Under the guidance of your hand, O Lord,
They sought refuge and found solace on these shores.
May, they rest in peace
Knowing that their descendants now flourish.