Our second project was to establish a permanent memorial to the Loyalists. The Secretary of State, and through him, Parks Canada, had been approached in the hope that an official memorial would be erected. The “Interpretation Centre” in Saint John that was finally proposed, after several meetings, however, was not expected to be ready until 1985.

To ensure a Memorial in the Bicentennial Year, it was therefore arranged that a Memorial Stone in the form of a circular slab of Pink granite would be presented by our Branch and laid in the centre of the new Loyalist Plaza, at the very spot where the Loyalists are believed to have landed on 18th May, 1783. Although we had hoped that this could be dedicated by H.R.H. the Prince of Wales during his visit to Saint John, the next most suitable time seemed to be during the U.E.L. Convention. Accordingly, on Wed. 29th June in the presence of about 250 Loyalists, as well as other spectators, the Mayor of Saint John dedicated the stone.

New Brunswick Branch is grateful to Saint John Bicentennial Inc. for all their help in making arrangements for the design and installation of this memorial stone, and in collecting and receipting the contributions from our members. 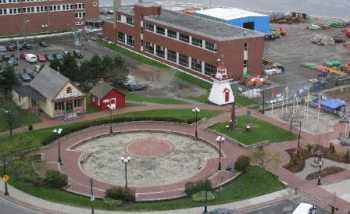 Loyalist Plaza as seen from the mayor’s office; the Memorial stone is the bulls eye in the circle in the Plaza

THIS STONE WAS
DEDICATED BY HER WORSHIP MAYOR ELSIE WAYNE
TO COMMEMORATE THE VISIT OF THEIR ROYAL HIGHNESSES
THE PRINCE AND PRINCESS OF WALES
JUNE 17, 1983
DURING CELEBRATIONS MARKING
THE BICENTENNIAL OF THE LANDING OF THE LOYALISTS
WHO FOUNDED THE CITY OF SAINT JOHN
AND THE PROVINCE OF NEW BRUNSWICK.

“LET THE PREVIOUS MEMORIES OF THEIR ACCOMPLISHMENTS INSPIRE
OUR CITIZENS TO ACHIEVE NEW ERAS OF ENERGETIC WORK, PERSEVERANCE,
DETERMINATION, AND HOPEFULNESS”
QUOTATION FROM AN ADDRESS DELIVERED IN 1883.

PRESENTED BY THE NEW BRUNSWICK BRANCH OF
THE UNITED EMPIRE LOYALISTS’ ASSOCIATION OF CANADA
AS A TRIBUTE TO THEIR LOYALIST FOREFATHERS
AND ALL THOSE WHOSE LIVES AND LABOURS CONTRIBUTED
TO OUR 200 YEARS OF PROUD GROWTH.
JUNE 29, 1983 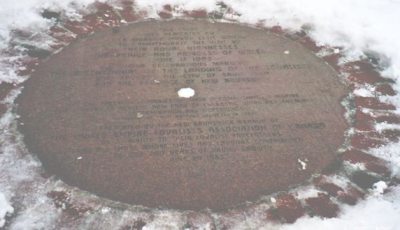