In 1991 the McGinness Project was fully realized with the unveiling of a granite memorial with bronze plaque in the graveyard of St. John’s Anglican Church , Academy Street, Bath Ontario, in the presence of many of the descendants of Sarah Kast McGinness. 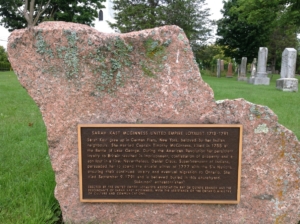 Sarah Kast grew up in German Flats, New York, beloved by her Indian
neighbours. She married Captain Timothy McGinness, killed in 1755 at
the Battle of Lake George. During the American Revolution her persistent
loyalty to Britain resulted in imprisonment, confiscation of property and a
son lost in a fire. Nevertheless, Daniel Claus, Superintendent of Indians,
persuaded her to spend the crucial winter of 1777 with the Six Nations,
ensuring their continued loyalty and eventual migration to Ontario. She
died September 9, 1791 and is believed buried in this graveyard.
Skén:non enhsatonrishen

ERECTED BY THE UNITED EMPIRE LOYALISTS’ ASSOCIATION OF CANADA BAY OF QUINTE BRANCH AND THE
DESCENDANTS OF SARAH KAST MCGINNESS, WITH THE ASSISTANCE OF THE ONTARIO MINISTRY
OF CULTURE AND CITIZENSHIP.

Photograph of the memorial supplied by Marie Barrons-Patterson, descendant of Sarah Kast McGinness.