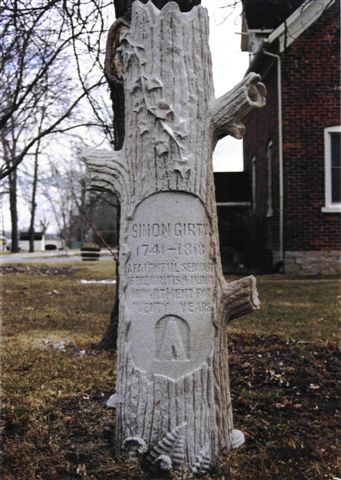 The inscription on the memorial stone reads as follows:

Simon Girty 1741 – 1818 A Faithful Servant of the British Indian Department for Twenty Years.” 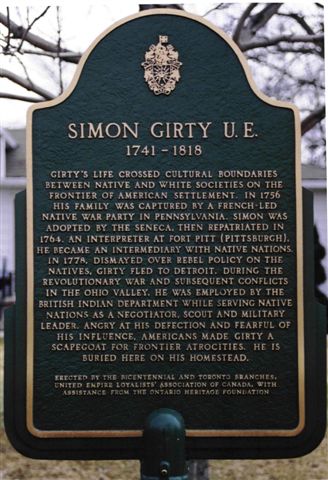 The inscription on the plaque reads as follows:

“Simon Girty UE 1741 – 1818 – Girty’s life crossed cultural boundaries between native and white societies on the frontier of American settlement. In 1756 his family was captured by a French-led native war party in Pennsylvania. Simon was adopted by the Seneca, then repatriated in 1764. In interpreter at Fort Pitt (Pittsburgh), he became an intermediary with native nations. In 1778, dismayed over rebel policy on the natives, Girty fled to Detroit. During the Revolutionary War, and subsequently in the Ohio Valley, he was employed by the British Indian Department while serving native nations as a negotiator, scout and military leader. Angry at his defection and fearful of his influence, Americans made Girty a scapegoat for frontier atrocities. He is buried here on his homestead. Erected by the Bicentennial and Toronto Branches of the UELAC with assistance of the Ontario Heritage Foundation.

Simon Girty was born in 1741 near Harrisburg, Pennsylvania. In 1756 his family was captured by a French-led Native War party in Pennsylvania. Simon was adopted by the Seneca Indians, living with them for eight years, then was repatriated in 1764. During the time he spent with the Seneca, Simon grew to appreciate the Indian culture.

Dissatisfied with American treatment of Native peoples, Girty fled to Detroit in 1778 and was employed by the British Indian Department as a negotiator, scout and military leader. Because of his influence with the Indians Girty was able to aid in the release of a number of captives during his lifetime. In the summer of 1784 he married Catherine Malott who had been living for several years as a captive of the Delaware tribe in Ohio. Catherine had the reputation of being the most beautiful woman in Detroit.

Following his marriage, Simon Girty settled near Amherstburg and for ten years continued to lead or encourage western Indians in their warfare with the Americans. Girty was exiled in 1812 when the Americans took control of Amherstburg but continued to reside there until his death. Described as “one of the most colourful and controversial settlers in the New Settlement,” Girty died in 1818 and was buried on his homestead with military honours.