Plaque Honouring the Landing of the Loyalists

On October 24, 2021, a plaque marking the landing of the Port Matoon Association was unveiled in St. Stephen, New Brunswick. Located in the David Alison Ganong Chocolate Park on 66 Milltown Blvd. It reads:

St. Stephen
At this location on May 26th, 1784,
Captain Nehemiah Marks,
leader of the group of Loyalists
And soldiers called the
Port Matoon Association,
would come ashore,
plant the British flag and
declare this new settlement Morristown.
That was the beginning of our community, soon after renamed
St. Stephen 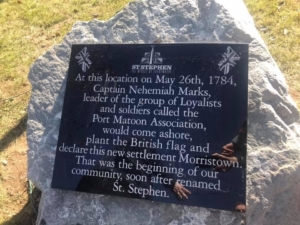 What once stood on one side of the present park back in the 1800’s was a building called Porter House. In the 1930’s the building became the Salvation Army Citadel. On the front of the Citadel was an old plaque which read “This location marks the landing site of the United Empire Loyalists”. In 1983 the building was torn down following the purchase of the property by the Irving Company. The whereabouts of that plaque is a mystery. As it was made of wood it could have been lost in the demolition. About 23 years ago following the donation by the Irving Company to the town, the property eventually became a community park called the David Alison Ganong Chocolate Park.

As part of the celebration of the 150th anniversary of the incorporation of St. Stephen, Ghislaine Wheaton, Deputy Mayor of St. Stephen and the 150 Committee Chair, welcomed the community to the dedication of the plaque on Sunday October 24, 2021. E. Allen Gillmor provided the background information following the introduction of local historian Darren McCabe. Then Mayor Allan MacEachern unveiled the plaque assisted by three children from the St. Stephen Elementary School, Ben Christie, Landon Wheaton and Julia Wheaton. 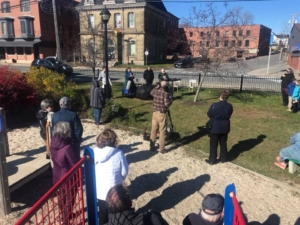